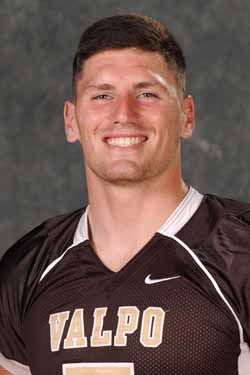 2014: Started all 12 games for Valpo at linebacker...announced to USA College Football I-AA FCS Pre-Season All-American Defensive Third Team...elected to Academic All-PFL First Team...received All-PFL Second Team honors...led the team in tackles (108) for the second straight season...also led the Crusaders in solo stops (43)...picked off a pass and forced a fumble...logged seven tackles in the season opener at Western Illinois (Aug. 28)...registered a QB hit and six stops in the home opener versus St. Joseph's (Sept. 6)...posted nine tackles at William Jewell (Sept. 20) - six solo, including one for a loss...set a season watermark for tackles in a game at Campbell (Sept. 27) with 12...recorded ten stops versus Marist (Oct. 4)...added three tackles to his stat sheet versus Missouri Baptist (Oct. 11) in the Crusaders' 55-7 rout over the Spartans on Homecoming...returned to double-digit form in tackles against Drake (Oct. 18) with ten stops...racked up 12 stops at Morehead State (Oct. 25)...posted eight tackles at Dayton (Nov. 1)...forced a fumble, picked off a pass, and registered eight tackles versus Butler (Nov. 8) in Valpo's 17-3 victory over the Bulldogs...accumulated a dozen tackles for the third time during the season at San Diego (Nov. 15)...closed out the season with 11 stops versus Davidson (Nov. 22) in the Brown and Gold's 27-13 triumph in the series finale...ranked 37th in all of FCS football in tackles per game (9.0)...chosen as the athletic department's Student-Athlete for the month of November...named to PFL Academic Honor Roll.

2012: Saw action in eight games for the Crusaders, including three starts...made his collegiate debut on August 30th versus St. Joseph's when he registered five tackles including three solos and one for a loss...made three tackles at Youngstown State (Sept. 8)...made three tackles at San Diego on Sept. 22nd...followed up with another three-tackle performance at home versus Butler (Oct. 6) including one tackle for a loss...tallied a season-high six stops at Campbell in Valpo's 41-21 win over the Camels...closed out the season at Morehead State with three tackles...named to Pioneer Football League Academic Honor Roll.

Prep: A three-year letterwinner for the Eagles ... earned All-State honors in Indiana as a junior ... named to the All-Hoosier Crossroads Conference Team as a junior ... recipient of team’s Leadership Award as a senior ... also lettered in track and field.