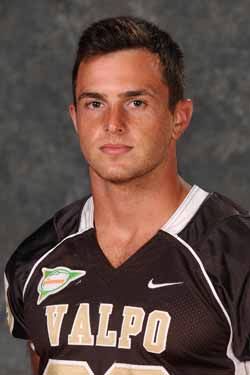 2012: Appeared in all 11 games for the Brown and Gold...recorded at least one tackle in every game...broke up two passes against Youngstown State (Sept. 8) to go along with two tackles...recorded five tackles against Duquesne at home on Sept. 15th...tallied a season-high eight tackles against Drake (Oct. 13)...broke up a pass and made four tackles against Dayton (Oct. 20)...returned a kick 15 yards versus Marist in addition to making a pair of tackles...notched seven tackles and broke up two passes versus Davidson on Nov. 10th...named to the Pioneer Football League Academic Honor Roll.

2010 (SDSU): Sat out the season as a redshirt for the Jackrabbits ... selected as team’s Special Teams Scout Team Player of the Year ... named to the Missouri Valley Football Conference Honor Roll.

Prep: A two-year letterwinner for the Eagles ... averaged 8.6 yards per carry as a senior and 6.3 yards per rush as a junior ... had 19 receptions for 235 yards as a junior and made eight grabs as a senior ... also returned punts ... team captain.