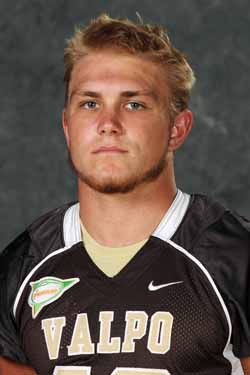 2016: Played in nine games during his junior campaign... Racked up 54 tackles (29 solos), his third straight 50-tackle season... Led the team and ranked in the Top 20 in the PFL with 7.5 tackles for a loss... His six tackle per game average ranked 18th among PFL linebackers... Made a key defensive play in Valpo's Homecoming victory over Davidson on Sept. 24. He forced a Davidson fumble and made the recovery at midfield, setting up an important touchdown drive in a 24-30 win... Reached double-figure tackles for the third time in his career on Oct. 8 against Drake, matching his career high with 10.

2015: Appeared in all 10 games during his sophomore year for the Crusaders ... tied for third on the team with 55 tackles, including 24 solo stops ... also ranked second on the team with three QB hurries ... opened season with four tackles and a QB hurry Sept. 3 at Eastern Kentucky ... picked up seven or more tackles on five occasions, including three straight weeks in games 2-4 ... totaled seven tackles Sept. 12 versus Sacred Heart, nine tackles Sept. 26 against San Diego and eight tackles - six solo - in Oct. 3 win at Davidson ... tallied eight tackles Oct. 24 at Stetson as well ... matched career high in season finale, totaling 10 tackles Nov. 21 at Jacksonville ... picked up a tackle for loss, recovered a fumble and registered a QB hurry against the Dolphins.

2014: Played in all 12 games for the Brown and Gold in an impressive rookie campaign at linebacker...racked up a season-high 10 tackles - one for a loss - in his collegiate debut at Western Illinois on Aug. 28th...recorded a pair of tackles in back-to-back contests against St. Joseph's (Sept. 6) and William Jewell (Sept. 20)...forced a fumble and tallied four stops at Campbell (Sept. 27)...amassed six tackles versus Marist (Oct. 4)...accounted for seven tackles - including one for a loss - versus Missouri Baptist (Oct. 11) in Valpo's 55-7 rout over the Spartans on Homecoming...rattled off another seven tackles (three solo) vs. Drake (Oct. 18)...registered a season-high four solo stops and a seven-yard sack as part of a five-tackle day at Morehead State (Oct. 25)...logged seven tackles in consecutive tilts against Dayton (Nov. 1) and Butler (Nov. 8)...picked off a pass at San Diego (Nov. 15) and returned it 21 yards in addition to tallying five stops against the Toreros...closed out a strong freshman year with six tackles - one for a loss - in the Brown and Gold's 27-13 win over Davidson in the season finale.

Prep: A three-year letter winner for Lance Jenkins and the Cudas...member of 2012 team that went undefeated in the regular season and were named District Champs...also lettered in weightlifting twice and baseball once...holds the school weightlifting record in clean & jerk (199 lb. class).

Personal: Kye is the son of William and Kim Hall ... major is biology.