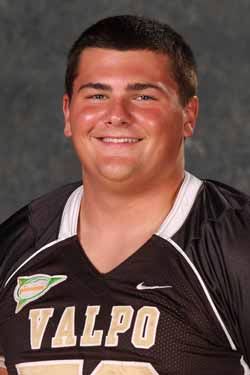 2013: Appeared in all 11 games for the Brown and Gold in his freshman season...accumulated 38 tackles (13 solo) including 4.5 for a loss...collected his first tackle in his collegiate debut at North Dakota (Aug. 29)...made one tackle in each of his next two contests...recorded three tackles, a fumble recovery, a QB hit, and a pass breakup in Valpo's 49-42 overtime win over Campell (Sept. 28) on homecoming...notched a season-high 11 tackles at Marist (Oct. 5)...added a tackle to his stat sheet versus Morehead State (Oct. 19)...registered a sack and three tackles at Drake (Oct. 26)...gathered four stops and broke up a pass against San Diego (Nov. 2)...made five tackles including one for a loss at Butler (Nov. 9)...closed out the season with three tackles versus Dayton (Nov. 16)...named to PFL Academic Honor Roll.

Prep: A three-year letterwinner for the Regents...named to First Team All-Big Eight in 2012...was a Big Eight All-Conference Honorable Mention his junior year in 2011...named to Honor Roll..volunteer for Madison Area YMCA Youth Program and Habitat for Humanity of Dane County...holds a 2nd degree black belt in karate.

Personal: Brandon is the son of Gerald and Amy Doepke ... major is marketing.