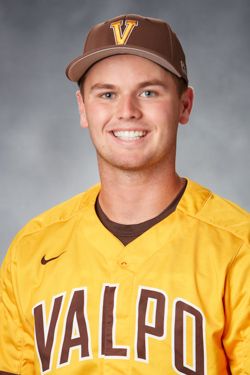 2019: Played in 17 games and made 13 starts in his first season at Valpo… Made his seventh career start and his first at first base on March 31 at DBU after his previous starts came behind the plate… Enjoyed his second career two-hit game in that contest against the Patriots… Scored the team’s lone run of the game in addition to scorching a double for the first extra-base knock of his Valpo tenure… Suffered an injury on April 19 at SIU Edwardsville and missed the remainder of the season.

Personal: Son of Carolyn and Damian Baker… Born on March 1, 1997… Majoring in commerce and leadership… Does everything in odd numbers. Favorite number is three, so he does most things in threes… Favorite food is In-N-Out Burger, movie is Bridge of Spies, pro team is the San Francisco Giants, MLB player is Buster Posey, musical group is Florida Georgia Line and TV show is Hawaii Five-0... Native of Australia… Started playing baseball at age 7 when he signed up to play at a barbecue and quickly fell in love with it… Played cricket also, but his mother said cricket was too slow and encouraged him to play baseball…Came to America in the fall of 2016 and spent one semester at the University of Central Florida before transferring to Scottsdale Community College, where he played the 2017 and 2018 seasons