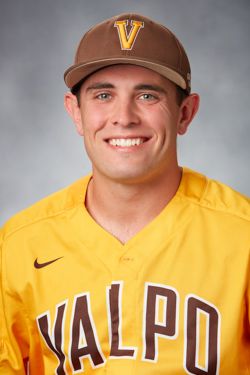 2018: Made six appearances out of the Valpo bullpen and worked 5 1/3 innings… Did not yield more than one run in any of his outings… Started his season with a scoreless inning against Ball State in the March 26 home opener… Struck out the side in a scoreless frame against Milwaukee on April 11… Also put a zero on the board in his lone inning of work on May 8 at Western Michigan, one of the only pitchers to have success on a day that saw the two teams combine for 31 runs.

2017: Pitched in three games, all in relief, during his sophomore season... Totaled 1/3 of an inning and allowed one earned run on one hit and one walk with one strikeout.

2016: Made seven appearances out of the Valpo bullpen as a freshman...did not factor into a decision, and carried a 8.31 earned-run average...made his collegiate debut at Jacksonville State (Feb. 19) in the season opener where he did not allow an earned run over one frame.

Personal: Nick is the son of Paul and Darlene Leaverton...favorite baseball team is the Los Angeles Angels...majoring in finance.