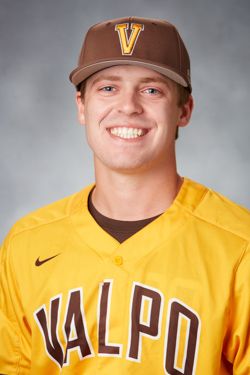 2020: Made two relief appearances during the COVID-19 shortened season… Did not allow a run or a hit in two innings of work… Took the mound on Feb. 29 vs. Southern Miss and March 6 at Georgia Southern.

2019: Appeared in 15 games and made four starts while logging 37 innings… Racked up 28 strikeouts during his rookie season… Worked around two walks to put a zero on the board in his outing on March 5 at North Carolina A&T… Worked a scoreless inning on March 22 vs. Butler… Worked three scoreless innings out of the Valpo bullpen on April 12 in the series opener at Indiana State, keeping a hot-swinging Sycamore offense at bay… Picked up the win with six innings of one-run ball in a midweek start vs. Western Michigan on April 17, his first career start. He permitted just three hits and the lone run came on a first-inning dinger… Pitched two innings of relief on April 20 at SIUE. Allowed three runs, but all three were unearned on two hits, a walk and two strikeouts… Had a no-hitter through four innings on April 23 at Notre Dame. Ended up with no decision after allowing three runs on four hits and three walks in 4 1/3 frames in a game Valpo lost 4-3… Received no decision after allowing two runs on three hits and seven walks in 4 2/3 innings against Chicago State on May 14, a game Valpo eventually won 4-3.

Prep: Led his team to an Illinois High School Baseball Class 4A state championship in 2018… Was the starting pitcher in the state championship game, helping Plainfield North to a 4-3 victory over Huntley. That marked the school’s first state title in any sport… Three-year letter winner… Played travel ball with Top Tier Baseball.