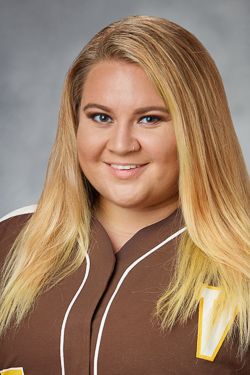 2020: Made nine pinch-hit appearances and saw action in the circle three times ... reached base three times as a pinch-hitter: hit by pitch versus Robert Morris Feb. 14, and via walks Feb. 16 against Colgate and Feb. 29 in win over Bethune-Cookman ... threw 1.1 innings of shutout relief to close March 1 win at Stetson ... tossed two innings against North Carolina A&T March 7, striking out two batters and registering a pair of putouts.

2019: Made 20 appearances in the circle as a junior, starting on six occasions ... opened season with 0.2 innings of shutout relief against Stephen F. Austin Feb. 8 ... surrendered just one run in 2.2 innings of work in Feb. 22 start against Delaware State ... threw two shutout innings to open March 5 win at North Carolina State ... tossed a season-high six innings out of the bullpen April 20 against Indiana State, giving up just four hits and three runs while striking out five ... surrendered one run in three innings of relief work April 27 at Evansville ... also made 12 plate appearances over the course of 11 games, her first career opportunities at the plate ... tallied an RBI in her first career plate appearance Feb. 9 at Mississippi State, drawing a bases-loaded walk ... picked up first career base hit as a pinch-hitter March 3 in resumption of suspended game against Wagner ... hit by a pitch March 24 at Southern Illinois in pinch-hitting appearance.

2018: Saw action in 27 games for the Crusaders as a sophomore, starting six times ... went 4-2 with a 2.71 ERA and four saves in 72.1 innings of work, striking out 67 batters while surrendering just 51 hits ... four saves is tied for sixth in a single season in program history, was tied for third among MVC pitchers and ranked 25th nationally ... also ranked 45th nationally and second in The Valley by surrendering just 4.94 hits/seven innings, and was third among MVC pitchers with a .197 opponents' batting average ... opened season Feb. 10 by carrying a no-hitter into the final inning before settling for a one-hit shutout of Tennessee State ... earned first save of year Feb. 16 at Charleston Southern, recording the game's final out ... completed the task Feb. 18 against North Carolina Central, throwing the 10th no-hitter in Valpo program history ... surrendered just two walks in the 3-0 win while striking out a career-high 11 batters ... no-hitter was Valpo's first since 2013 and was the first seven-inning no-hitter by a Crusader pitcher since 2002 ... tossed 1.2 perfect innings out of the bullpen March 3 against UNLV ... threw three innings of one-hit ball March 6 in opener at Grand Canyon ... recorded save at UC Davis March 10 with 2.2 shutout innings, giving up just one hit and striking out three ... followed the next day with two shutout innings against the Aggies ... picked up another save in nightcap March 24 at Missouri State with three hitless innings of relief work ... earned victory in opener against Southern Illinois March 30, surrendering just one unearned run in 3.1 innings while striking out five ... threw final three innings of April 21 nightcap win over Evansville, giving up just one run to record fourth save of the season ... notched the victory in nightcap at Loyola April 24 with 3.1 shutout innings, surrendering just one hit.

2017: Made 19 appearances in the circle in her freshman season at Valpo, starting on two occasions ... posted a 1-2 record with a 4.32 ERA in 47 innings of work ... enjoyed a strong Horizon League campaign, finishing league play with a 2.62 ERA and a .243 opponent's batting average in 26.2 innings over eight appearances ... ranked fifth in the league in league-only action in opponent's batting average and sixth in ERA ... debuted with 1.2 innings out of the bullpen Feb. 18 against UMBC ... earned first career win the next day versus Howard with four innings of relief work ... threw four innings of shutout softball in relief action, surrendering just one hit, at Loyola Mar. 21 ... recorded back-to-back strong shutout relief appearances in Horizon League play in mid-April, tossing 4.1 innings and giving up just two hits against UIC Apr. 12 and following with three innings of one-hit ball at Cleveland State Apr. 14 ... threw five shutout innings, giving up just two hits, at Detroit Mercy Apr. 22 ... recorded a 2.2-inning scoreless appearance in non-league action at Northern Illinois Apr. 26 ... threw a season-high 7.1 innings in a relief appearance against Oakland Apr. 28, giving up just give hits and one earned run while striking out a season-best eight batters.

Prep: A four-year letterwinner for the Huskies ... a First Team All-State honoree as a senior ... earned First Team All-Area honors in 2016 after being named a Second Team selection in 2015 ... twice earned All-Conference accolades ... named high school's Female Athlete of the Year as a senior ... played travel softball for the Wasco Diamonds after spending 10 years with the Oak Park Windmills.

Personal: Daughter of Jessica and Dewayne Richardson ... majors are biology and secondary education.