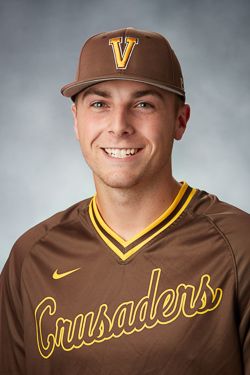 2020: Started all 14 games he played during the COVID-19 shortened season… Ranked second on the team in batting average at .264… Had a team-high two triples and ranked second on the club with 14 hits despite missing two games… Was hit by a pitch a team-high four times… Was second on the team in stolen bases, going a perfect 3-for-3… Drove in two runs and scored six… Had a season-high three hits on Feb. 17 at Western Kentucky, reaching base four times in the victory over the Hilltoppers… Equaled his high with three hits on March 10 at Alabama State while also scoring a season-high three runs.

2019: Played in 46 games and made 43 starts in his first season at Valpo... Went 2-for-4 on March 3 at UNCW, his first multi-hit game in a Valpo uniform… Hit his first home run of the year and his first extra-base knock as a Valpo player on March 12 at Tennessee Tech… Had two hits in both games of a March 16 doubleheader vs. Northern Illinois at Chicago State… Had his fourth multi-hit output of the year on March 26 at Purdue… Launched his second home run of the year at Missouri State on May 16, a solo shot in the third inning that was the first hit by either team in the game… A day after his second homer of the season, knocked his fourth double of the year on May 17 at Missouri State.