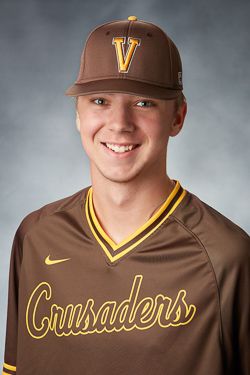 2022: Logged 18 2/3 innings and struck out eight while walking three over 12 appearances out of the Valpo bullpen... Finished the season with a 5.79 ERA and if you take out March 13 at SEMO and April 10 vs. Indiana State, he had a 1.84 ERA over his other 10 games... Worked a scoreless inning on March 19 at Murray State and did the same on March 29 vs. Purdue Fort Wayne before logging two scoreless on April 5 vs. Milwaukee... Started a new stretch of scoreless ball on April 12 at Eastern Illinois, when he began a sequence of four straight outings spanning 4 1/3 innings without yielding a run during which he permitted just two hits... Worked two clean innings on May 15 vs. Bradley in his final appearance of the season.

2021: Made 13 appearances including one start… Notched nine strikeouts in 14 innings of work… Had three straight scoreless outings on April 1 (at DBU), April 24 (vs. SIU) and April 27 (at No. 8 Notre Dame) and did not allow any hits in three total innings during that stretch… Worked two scoreless frames and yielded just one hit in Game 2 of a May 8 doubleheader at Bradley.

2020: Made five appearances out of the bullpen during the COVID-19 shortened season… Had an ERA of 3.52 that was fourth on the team… Logged 7 2/3 innings while walking three and striking out three… Made his collegiate debut with a scoreless inning on Feb. 15 at Western Kentucky and followed with a scoreless frame on Feb. 23 at No. 3 Louisville… Heaved a scoreless inning on March 11 at Alabama State in what proved to be his final appearance of the season.

Before Valpo: Named the NSC Ace of the Month in May 2019… Earned a spot on the Lake County all-area team in 2019 after becoming an all-conference runner-up… Earned three varsity letters in baseball…. Also achieved two letters in swimming, receiving all-state and All-American recognition during the 2016-17 season… Played travel baseball with the Chi-Town Cream (2019) and Top Tier (2018)… Was a Perfect Game All-American Honorable Mention and named to a Perfect Game All-Tournament Team.