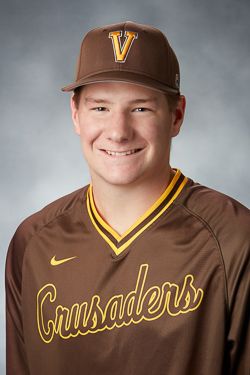 2020: Ranked second on the team with a 3.12 ERA… Appeared in four games, all in relief, logging 8 2/3 innings during the COVID-19 shortened season… Racked up 11 strikeouts while holding opponents to a .194 batting average… Did not allow a run in any of his final three appearances, spanning 6 1/3 innings… Struck out five and walked just one while yielding one hit over four scoreless frames to earn the victory on March 10 at Alabama State.

2019: Had two wins while making 15 starts and logging 88 2/3 innings during his junior season… Led the team in innings pitched for the second consecutive year… Racked up 78 strikeouts to lead the team, the most by a Valpo pitcher since 2015… Led the team in strikeouts for the third straight season, becoming the second consecutive Valpo pitcher to do so as Dalton Lundeen led the team in that area from 2014-2016. Before Lundeen, the last pitcher to lead the team in strikeouts in three straight seasons was Shawn Barker from 1988-1990… Enters his senior season with 185 career strikeouts, needing 202 to crack the Top 10 in program history…Enters his final year with 233 1/3 career innings pitched, needing 273 1/3 to make his way into the Top 10 in program history… After beginning the season as the Saturday starter, Tieman was promoted back into the Friday role that he held as a sophomore… Racked up a career-high 12 strikeouts on April 19, permitting just two hits in six shutout innings while picking up the win at SIU Edwardsville. Those 12 strikeouts were the most by a Valpo pitcher in a single game since 2011… Pitched his third career complete game on May 3 at Bradley, scattering six hits and striking out seven while walking two and yielding two runs to the Braves.

2018: Was Valpo’s Friday starting pitcher throughout the season, garnering five wins while making 15 starts and one relief appearance… Compiled 98 2/3 innings, the most on the team and third most in the Missouri Valley Conference… Led the team with 56 strikeouts, a total that ranked 15th in the conference… Was one of nine players in The Valley with 15 starts or more… Posted a 3.73 ERA in seven Missouri Valley Conference starts… Started the season by becoming the first Valpo underclassman pitcher to start on Opening Day since Bryce Shafer in 2009… Got the win on March 16 at Arkansas Pine Bluff after striking out seven and issuing no walks. The Crusaders didn’t allow any walks in that game, the first time they’d done that since April 23, 2017… Pitched Valpo to a 9-2 win over the school’s instate rival Butler on March 23. He yielded two runs on seven hits and one walk while striking out four in 7 1/3 innings. Tieman did not allow a run over the first seven innings and both runs charged to him scored after he had left the game. He sent down 11 straight batters from the third to the sixth. Tieman's outing came against Big East foe Butler, a team that entered that game with a 16-3 record… In the conference opener vs. Bradley, he left in position for the win but wound up with no decision after allowing three runs (two earned) on eight hits and two walks in seven innings… Took the loss after allowing six runs (three earned) in 7 1/3 innings on April 6 at Southern Illinois… Got no decision despite eight strong innings at Michigan State on April 13… Threw his first career complete game in a 7-2 win over Evansville on April 20. Scattered nine hits and permitted only two earned runs while racking up a season-high eight strikeouts… Allowed four earned runs and no walks in six innings on April 27 vs. DBU… Got no decision after allowing three runs in 6 1/3 innings against Missouri State on May 4… Threw a career-high 132 pitches in his second complete game of the season on May 11 at Illinois State, yielding just one run on eight hits and two walks to lift Valpo to a 2-1 victory. Gained his team-leading fifth victory of the season, surpassing his 2017 total of four wins, which tied for the team lead… Received no decision in his MVC Tournament start against host DBU, a game Valpo eventually won 13-10.

2017: Made 20 appearances and four starts during his freshman season... Shared the team lead in wins by going 4-1 and held the team watermark in strikeouts (51) and saves (7)... His seven saves puts him in a tie for eighth in program history in career saves after less than a full season as the team's closer... Made his collegiate debut on Feb. 17 at Western Kentucky... Nailed down his first career save on Feb. 19 at Western Kentucky... Made his first career start and picked up his first win on April 21 at Northern Kentucky, allowing three runs and striking out seven in 5 2/3 innings... Fanned a season-high 11 while allowing one earned run over seven innings in his first Emory G. Bauer Field start on May 5 vs. Youngstown State, a 6-2 victory... Came within one out of a complete game on May 13 at Milwaukee, earning the win with 8 2/3 frames of four-run (two earned) ball... One of a league-high three Crusaders on the Horizon League all-freshman team, helping the Crusaders extend their streak of multiple all-freshman team honorees to seven straight years... Became the first Crusader named a freshman All-American since shortstop Spencer Mahoney in 2012... Enters the 2018 season as one of three MVC players who were Freshman All-American a year ago, joining Bradley's Brendan Doherty and Illinois State's John Rave.

Personal: Son of Larry and Sharon Tieman… Brothers are Andrew and Philip… Has lived in Missouri, Georgia and Illinois… Favorite food is pizza… Favorite movie is Remember the Titans… Favorite professional baseball team is the St. Louis Cardinals… Favorite MLB Player is Albert Pujols… Favorite Musical group is Florida Georgia Line… Born on Oct. 31, 1997… Majoring in finance with a minor in business analytics.