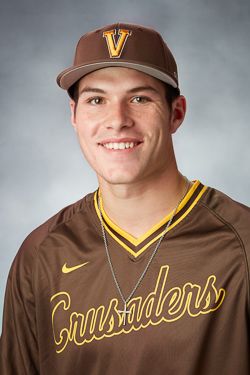 2022: Played in 21 games and made 18 starts, driving in nine runs while scoring seven and accruing three extra-base hits... Had multi-hit games on three occasions (Feb. 20 at Memphis, April 12 at Eastern Illinois and April 23 vs. Missouri State)... Drove in three including a two-run double on April 30 at SIU... Roped a pinch-hit single to right to lead off the top of the ninth in an MVC Tournament game vs. Indiana State on May 25, breaking up a perfect-game bid by Indiana State’s Matt Jachec in the process... Earned Valparaiso University Presidential Academic Honors.

2021: Appeared in 25 games and made 24 starts… Totaled 18 hits, 10 of which went for extra-bases including two triples and three home runs… Drew 11 walks while stealing two bases, scoring 15 runs and driving in 16… Drove in a season-high three runs and launched a home run in the Feb. 19 season opener at UAB… Had multiple RBIs on four occasions… Ripped a long ball on March 12 at Middle Tennessee… Combined with Damon Jorgensen to hit back-to-back home runs on March 19 at Western Kentucky… Was one of two Valpo players with multiple triples during the season… Was the only player on the team with both multiple triples and multiple home runs… Received Valparaiso University Presidential Academic honors… Member of MVC Academic Honor Roll.

2020: Appeared in 12 games and made 10 starts during the COVID-19 shortened season… Collected six hits including a triple and a home run… Was the only player on the team with both a triple and a home run… Scored six times, drove in four and worked seven walks… Had two multi-hit performances – Feb. 23 at No. 3 Louisville and March 7 at Georgia Southern… Had his first career triple on Feb. 29 vs. Southern Miss, then followed with his second career home run on March 1 at McNeese.

2019: Played in 46 games and made 43 starts during his freshman campaign… Launched the first home run of his collegiate career on April 16 vs. Western Michigan, a solo blast for one of three Valpo homers in that game… Accounted for three of the team’s four hits in the series opener vs. Evansville on April 26 and went on to bat .455 (5-for-11) during the series. He had six hits in four games that week after entering the week with six total hits in his first 20 games… Had two hits and two RBIs on May 17 at Missouri State, his fourth multi-hit game of the season and his first career multi-RBI game… Broke up a Missouri State perfect game by drawing a sixth-inning walk in Valpo’s MVC Tournament game on May 21 in Normal, Ill.