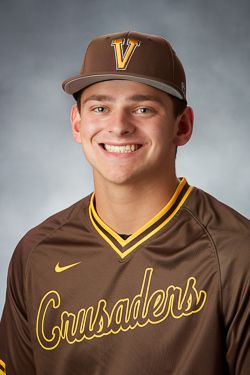 2020: Did not see game action during his first season on campus.

Before Valpo: Helped his team to a regional championship during his junior season… Was the third conference starter behind a University of Illinois commit and current Valpo pitcher Colin Fields during his junior season… As a senior, was a Perfect Game Preseason All-American Central Region Honorable Mention before going on to earn all-conference and all-area recognition… Threw a no-hitter in a 1-0 victory against his team’s biggest rival as a senior… Earned two varsity letters… Also played soccer in high school, helping his team finish as the state runner-up two years in a row… Played travel ball for Libertyville (8u-13u), where he won the 12U Mid-Suburban Baseball League title… Played 14u-17-u for the Slammers-Coyote… Achieved honor roll all four years of high school.

Personal: Majoring in psychology… Born on Sept. 26… Son of Jen and Mark Klainos… Has a brother, Colin, and a sister, Lauren… Hobbies include binge-watching Netflix shows, watching YouTube and playing Mario Kart on the Nintendo Switch… First car was a 2001 H2 Hummer… Favorite food is Philly Cheesesteak, movies are Step Brothers, Wolf of Wall Street and Deadpool 1&2, pro baseball team is the Chicago Cubs, MLB player is Kris Bryant, musical groups are Kanye West and Louis the Child, TV shows are Breaking Bad, Stranger Things and The Office.