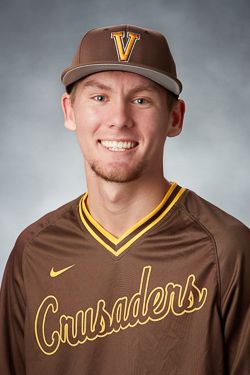 2022: Appeared in five games and made two starts... Worked a scoreless inning on Senior Day in the May 15 game vs. Bradley... Logged another scoreless frame on May 25 in the MVC Tournament vs. Indiana State in Springfield, Mo.

2021: Logged 27 2/3 innings over nine appearances, making six starts… Racked up 32 strikeouts while issuing 15 walks… Made his first start of the season on March 23 at No. 14 Notre Dame, allowing two runs on four hits in four innings against a prolific offense… Garnered a season-high six strikeouts on April 25 vs. Southern Illinois, allowing one run (none earned) on four hits and one walk in six innings to earn the victory… Valpo prevailed in each of his final three starts of the season including a May 8 game at Bradley where he allowed one run on two hits, two walks and six strikeouts… Missed the remainder of the season with an injury.

2020: Appeared in five games and made four starts during the COVID-19 shortened season… Logged 19 innings and racked up 10 strikeouts… Had his best outing of the year on March 6 at Georgia Southern, permitting just one hit over four scoreless innings in his lone relief appearance.

2019: Finished his freshman season with a 3-4 record while appearing in 16 games and making nine starts… Struck out 39 over 59 innings… Owned the team lead in victories as only a freshman… Made his way into the weekend rotation and finished the season as the Saturday starter after starting the year as a midweek/bullpen arm… Made his first collegiate start on March 26 at Purdue, allowing three runs (one earned) on three hits and two walks in four innings in a tough-luck loss… Made his first career weekend start and permitted four runs (three earned) on six hits in three innings on March 31 at DBU… Turned in a solid start to help Valpo to its first conference win of the season, a 4-2 triumph over Illinois State in the second game of a doubleheader on April 6. He recovered from a bout of wildness where he allowed two runs without yielding a hit in the third inning to get out of that frame and put two more zeros on the board, finishing with a line of two runs on just two hits while striking out six in five innings. He received no decision against the Redbirds… Allowed five runs (three earned) on seven hits in four frames and received no decision on April 13 in Game 2 of a doubleheader at Indiana State… Took the defeat in the rubber match of a series at SIUE on April 20… Recorded his first career win on April 28 vs. Evansville, pitching Valpo to a 6-2 victory thanks to 6 2/3 innings of four-hit, two-run ball in which he walked five and struck out three… Made it back-to-back victories by earning the win on May 4 at Bradley, allowing two runs on seven hits and three walks in 5 1/3 innings… Earned his third straight win on May 11 vs. Southern Illinois, this time becoming the only Valpo pitcher to throw a nine-inning complete game in 2019 in a 7-1 rout of Southern Illinois. He scattered four hits and walked five while striking out five… During his starts against Evansville, Bradley and Southern Illinois, went 3-0 with a 2.14 ERA with opponents hitting .214 against him.

Prep: Was an all-conference and all-area performer as a junior and senior… Named the MSL East Player of the Year as a senior… Honored as the Daily Herald Player of the Year following his senior season… Was an all-area captain and first-team all-state selection as a senior… Four-year letter winner in baseball who also played basketball (three letters) and golf (two letters)… Played travel ball with the Illinois Patriots for three years and earned Perfect Game all-tournament team recognition… Played one year for Top Tier Hoffman.