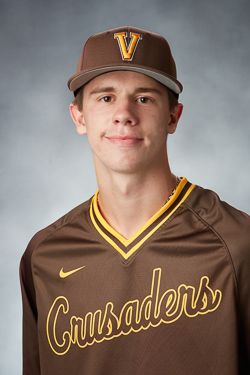 2021: Made 13 appearances including six starts… Struck out 44 in 64 innings of work… Made his season debut with six strong innings on Feb. 19 at UAB, allowing one run on four hits and no walks while striking out five in an eventual 6-2 Valpo victory… Made his first start of the season on April 23 vs. Southern Illinois, a game Valpo eventually won 7-6… Earned the victory on April 30 vs. Illinois State by tossing seven innings of two-run, six-hit ball while striking out five in a 3-2 triumph over the Redbirds… Had a season-high six strikeouts in 6 1/3 innings on May 14 vs. Evansville… Saw action in the MVC Tournament by working 2 2/3 innings on May 26 vs. DBU… Earned Valparaiso University Presidential Academic Honors Award and MVC Academic Honor Roll.

2020: Made five appearances and two starts during the COVID-19 shortened season… Logged 17 2/3 innings while striking out 11… Made his collegiate debut by allowing one earned run over 2 1/3 frames on Feb. 15 at Western Kentucky… Made his first collegiate start on Feb. 28, holding Southern Miss to three runs over 6 1/3 innings… Notched a season-high five strikeouts in just three innings on March 10 at Alabama State, his final outing of the year.

Before Valpo: Earned all-conference and all-area honors in high school while helping his team to back-to-back regional championships… Won three varsity letters… Also competed in freshman football… Played travel baseball for the Chicago Pirates… Set his school’s record for career wins by a pitcher in the program's 60-year history... Earned the distinction of West Suburban Gold conference pitcher of the year in 2019... Was on the honor roll every semester in high school

Personal: Son of Brandi and Robert Mintz… Has three sisters and one brother... Majoring in computer engineering… Birthday is Dec. 27, 2000… Hobbies include snowboarding and other extreme sports and video games… Does magic tricks… Favorite food is chicken tenders, movie is 42, pro baseball team is the Chicago Cubs, MLB player is Javier Baez, musical group is the Red Hot Chili Peppers, TV show is Game of Thrones.