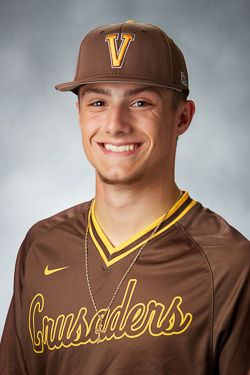 2022: Led the team in hitting and finished with Valpo’s highest since season batting average since 2010 at .365... Named to the All-MVC First Team, becoming the first Valpo player since 2018 and second since joining The Valley to earn that distinction... Also earned Collegiate Baseball Newspaper Freshman All-American honors and was part of the MVC Scholar-Athlete First Team... Finished his season fourth in the MVC in batting average and ninth in on-base percentage (.431)... Finished second in The Valley in league-only batting average at .384... Enjoyed four-hit games on three occasions, accounting for three of the team’s five four-hit games by doing so on March 25 vs. St. Bonaventure, April 30 at Southern Illinois and May 20 at Evansville... Became the first Valpo player with three games with four hits or more in a single season since Chase Dawson in 2018... Missed time early in the season with an injury before appearing in 37 games and making 36 starts as the team’s everyday second baseman... Slugged .516, accrued 65 total bases, had 14 doubles, a triple, a home run, 21 runs scored, three stolen bases and 17 RBIs... Hit a line-drive home run on April 12 at Eastern Illinois for his first career round-tripper... Finished a home run shy of the natural cycle on April 30 at Southern Illinois as his single, double and triple came in that order as part of a four-hit game... Named the MVC Player of the Week on May 2 after hitting .667 in a three-game series at SIU (8-for-12)... Earned Valparaiso University Presidential Academic Honors.

2021: Appeared in four games before incurring a season-ending injury… Had two hits in 13 at-bats, both doubles, while notching two RBIs and one run scored… Drew one walk… Had a perfect fielding percentage in eight chances at second base and turned a pair of double plays… Earned Valparaiso University Presidential Academic Honors, MVC Commissioner’s Academic Excellence Award and MVC Honor Roll.

2020: Started all 16 games during his first season on campus, which was shortened due to COVID-19… Collected 10 hits including two doubles and a home run… Drove in six, one of four players on the team with six or more RBIs and the only freshman to hit that threshold…Led the team in runs scored with nine…Drew a team-high 23 bases on balls and was third on the team with a .358 on-base percentage… Led the team with four stolen bases and in assists with 39… Had season highs in hits (three) and RBIs (four) while launching his first collegiate home run on Feb. 23 at No. 3 Louisville… Became the first Valpo freshman to drive in four in a game since Grant Yoder on April 24, 2012 at Purdue Fort Wayne (then IPFW)… Reached base three or more times in three consecutive games from Feb. 23-28, including five walks in one day spread over two games on Feb. 28… Had multiple bases on balls in four of his 16 games.

Before Valpo: Earned all-conference honors as a sophomore, junior and senior… Was ranked the No. 4 shortstop in Indiana in 2019 by PrepBaseballReport.com… Earned four varsity letters in baseball while also winning letters in wrestling as a freshman and sophomore… Was a two-time conference champion in wrestling while capturing a sectional championship, qualifying for semistate and posting a record of 35-5 as a sophomore… Played travel ball for the Morris Chiefs, where he won the Klaja Award… Was a two-year member of National Honor Society, spent three years as class president, was the president of the DECA club, class representative in SLYCE, a DARE officer and a two-time representative at the Student-Athlete Leadership Conference.

Personal: Majoring in management and finance… Born on Dec. 8… Son of Julie and Keith Tucker and has one sister, Kylin… 2019-20 President of Brandt Hall (dorm)… Hobbies include kayaking… Can juggle and walk on his hands… Can drink a bottle of water in 1.5 seconds… Says he can “straight up break it down” with dance moves… Favorite food is tacos, movie is Black Panther, pro baseball team is the Chicago Cubs, MLB player is Javier Baez, musical group is Migos and TV show is The Office.