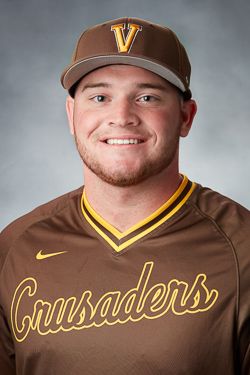 2020: Started all 16 games during the COVID-19 shortened season… Accrued 12 hits including three doubles (tied for the team lead) while driving in seven runs and scoring six… Was third on the team with seven bases on balls… Had a season-high three hits on Feb. 23 at No. 3 Louisville while also scoring a pair of runs… Enjoyed a four-RBI game on Feb. 29 vs. Southern Miss… Had back-to-back multi-hit outputs on Feb. 29 vs. Southern Miss and March 1 at McNeese.

Before Valpo: Was the West team MVP for his league all-star game in 2016, finishing a double shy of the cycle… Was a two-time Central California Conference champion in high school (2014, 2015)… Was named the MVP of the CCC in 2016 after earning first-team all-conference honors in 2014 and second-team all-conference recognition in 2015 as a sophomore on varsity… Played travel ball with NorCal Baseball from 2012-2016… Was named to the 16U Perfect Game World Series All-Tournament Team, earned a Top 500 national rank by Perfect Game, 2015 Perfect Game Preseason underclassman All-America high honorable mention, 2016 Perfect Game All-American in California, Ranked 164th nationally among outfielders, 96th in California overall and 24th in California among outfielders by Perfect Game.

Personal: Majoring in communication… Born on April 29… Son of John and Janene Temple… Has a sister, Jillian… From the most agriculturally diverse area in the nation with over 400 commodities grown in the region… Enjoys golfing and snowboarding… Favorite food is sushi, movie is Animal House, pro baseball team is the San Francisco Giants, MLB player is Mike Trout, musical group is Rebelution and TV show is The Grand Tour.