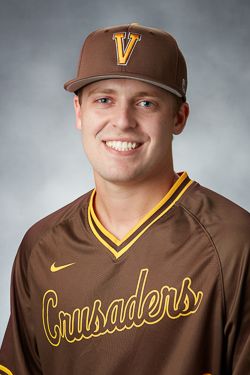 2022: Made three appearances out of the Valpo bullpen... Turned in a scoreless inning in his final collegiate appearance on May 25 vs. Indiana State in an MVC Tournament game in Springfield, Mo... Earned Valparaiso University Presidential Academic Honors.

2021: Allowed two earned runs on four hits while striking out three over four innings of work spanning three relief appearances… Made his season debut with an inning on Feb. 27 at Jacksonville State… Worked a scoreless inning while striking out a pair on May 1 in the first game of a doubleheader vs. Illinois State… Earned Valparaiso University Presidential Academic Honors Award, MVC Commissioner’s Academic Excellence Award and MVC Academic Honor Roll.

2020: Made two relief appearances during the COVID-19 shortened season… Did not allow a run or a hit in two innings of work… Took the mound on Feb. 29 vs. Southern Miss and March 6 at Georgia Southern.

2019: Appeared in 15 games and made four starts while logging 37 innings… Racked up 28 strikeouts during his rookie season… Worked around two walks to put a zero on the board in his outing on March 5 at North Carolina A&T… Worked a scoreless inning on March 22 vs. Butler… Worked three scoreless innings out of the Valpo bullpen on April 12 in the series opener at Indiana State, keeping a hot-swinging Sycamore offense at bay… Picked up the win with six innings of one-run ball in a midweek start vs. Western Michigan on April 17, his first career start. He permitted just three hits and the lone run came on a first-inning dinger… Pitched two innings of relief on April 20 at SIUE. Allowed three runs, but all three were unearned on two hits, a walk and two strikeouts… Had a no-hitter through four innings on April 23 at Notre Dame. Ended up with no decision after allowing three runs on four hits and three walks in 4 1/3 frames in a game Valpo lost 4-3… Received no decision after allowing two runs on three hits and seven walks in 4 2/3 innings against Chicago State on May 14, a game Valpo eventually won 4-3.

Prep: Led his team to an Illinois High School Baseball Class 4A state championship in 2018… Was the starting pitcher in the state championship game, helping Plainfield North to a 4-3 victory over Huntley. That marked the school’s first state title in any sport… Three-year letter winner… Played travel ball with Top Tier Baseball.