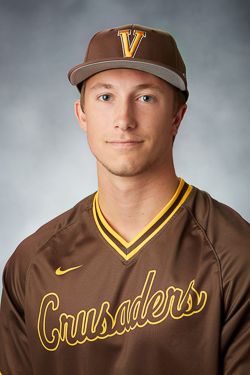 2020: Played in 12 games and made 10 starts during the COVID-19 shortened season… Had seven hits including one double while driving in two runs and scoring twice… Had two multi-hit showings, Feb. 23 at No. 3 Louisville and Feb. 29 vs. Southern Miss… Drove in a pair and had his first extra-base knock of the season in the Feb. 29 game against Southern Miss.

2019: Played in 25 games and made 17 starts while driving in 11 runs… Was limited to pinch-hitting duties for much of the season due to an injury that prevented him from playing the field.

2018: Saw action in 34 games and made 26 starts for the Crusaders… Belted a pair of home runs and drove in 10… Ripped his first home run of the year in the home opener against Ball State, then launched another in a rout of Milwaukee at Emory G. Bauer Field on April 11… Had a strong weekend in the Valley of the Sun in early March, going 3-for-4 with two doubles, three runs scored and two RBIs against Grand Canyon on March 3 before racking up three more hits and scoring two more runs the next day against CSUN. The three hits in each of those contests matched a career watermark… Had a pair of two-RBI games – March 3 at Grand Canyon and April 11 vs. Milwaukee.

2017: Saw action in 32 games and made 28 starts during his freshman year... Batted .282 with one home run and 14 RBIs... Led the team in batting average in league-only games at .343 in 20 contests... Made his Crusader debut with one at-bat on Feb. 18 at Western Kentucky... Picked up his first collegiate hit and RBI on Feb. 25 at UAB... Had two hits in his first collegiate start on Feb. 26 at UAB... Collected a season-high three hits on three occasions - March 26 at UIC, April 8 at Northern Kentucky and April 21 at Northern Kentucky... Had two two-RBI games - April 8-9 vs. Northern Kentucky, driving in five runs in the three-game series... Named to the Horizon League all-freshman team, one of three Crusaders to receive the honor.

Prep: Two-year letter winner at Naperville North… Named to all-conference team after his junior and senior seasons… Named to all-area team following his senior campaign… Played travel baseball for Cangelosi Baseball (2015), the Illinois Sparks (2016) and the Naperville Renegades (2010-2015)… Held a 3.75 GPA and was on high honor roll… Recipient of Dr. Suzanne Cooke Scholarship.

Personal: Son of Scott and Debbie Barczi… Father Scott played baseball at Northwestern and was drafted in the 10th round of the 1987 MLB First-Year Player Draft by the Pirates. Scott spent four seasons with the Pittsburgh organization, reaching as high as Double-A… Hobbies include guitar and sports journalism… Favorite food is steak taco from Los Taps… Favorite movie is Forest Gump… Favorite professional baseball team is the White Sox… Favorite MLB players are Kris Bryant and Salvador Perez… Favorite musical group is the Red Hot Chili Peppers… Born on Dec. 20, 1997… Majoring in communications.