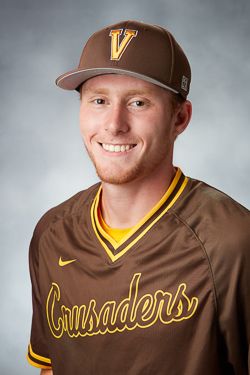 2022: Appeared in nine games, totaling three hits, a walk and two HBP while driving in three runs and scoring three... Started at catcher on four occasions including all three games of a series at Southern Illinois (April 29-May 1)... Had a hit in each game of the series against the Salukis including his first collegiate home run on April 30.

2021: Appeared in 25 games and made 23 starts… Accrued 12 hits including five doubles… Drove in seven runs, drew three walks and stole a pair of bases… Enjoyed a two-double game on Feb. 27 at Jacksonville State… Caught the eighth no-hitter in program history and first since 1992, which was thrown by Colin Fields on March 13 at Middle Tennessee and featured an immaculate inning… Cut down nine would-be base stealers while committing just two errors in 212 chances… Member of MVC Academic Honor Roll.

2020: Played in 11 games and made 10 starts during the COVID-19 shortened season… Had three hits, one run scored, a double, two stolen bases and one RBI while drawing one walk and being hit by a pitch once… Caught two runners trying to steal, had 75 putouts and was credited with six assists.

2019: Played in 36 games and made 34 starts behind the plate in his rookie season at Valpo… Hustled out a double on March 29 at DBU for the first extra-base knock of his collegiate career… Went 2-for-3 at the plate and a 2-for-2 in cutting down would-be base stealers in the series opener at Bradley on May 3. That was his first career multi-hit game and featured his second career double… Turned in his second RBI of the year to put his team in the lead for good on May 4 in a 5-2 win over Bradley… Caught all three games against Southern Illinois from May 10-12 and limited the Salukis to 4-of-9 in stolen base attempts. Southern Illinois entered the series third in the nation in stolen bases per game and fifth in total steals… Hit .357 over the final four games of the regular season to lead the team during that stretch.

Prep:  Played travel ball for Lou Collier A’s from 2015-2017… Member of the Reds Scout Team in the Fall of 2017… Was on high honor roll all four years of high school… Three-year letter winner at Mt. Carmel.

Personal: Brother Scott played three years at Valpo and was selected by the Texas Rangers in the 17th round of the 2018 Major League Baseball First-Year Player Draft… Majoring in business marketing… Born on Nov. 17, 1999… Son of Scott and Melissa Kapers… Hobbies include fishing and hunting... Favorite food is salmon, movie is Dazed and Confused, pro baseball team is the Red Sox, MLB player is Wilson Contreras and TV show is Stranger Things.