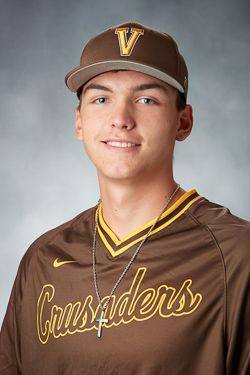 2022: Made seven starts as the team’s Friday starter before going down with a season-ending injury... Allowed two runs (none earned) in six innings of five-hit ball on March 4 at Omaha... Struck out 12 over six innings on March 25 vs. St. Bonaventure... Earned Valparaiso University Presidential Academic Honors.

2021: Made 13 appearances including 10 starts… Struck out 41 in 48 1/3 innings of work… Notched a season-high eight strikeouts over seven innings and earned the victory in Game 2 of a March 13 doubleheader at Middle Tennessee… Earned his second win of the year when he came out of the bullpen with four innings of one-run ball while walking none and fanning four on May 2 vs. Illinois State, a 7-6 Valpo victory… Tossed an eight-inning complete game in a tough-luck 2-1 loss in the May 22 regular-season finale at Missouri State… Made an MVC Tournament start and worked four frames on May 28 at Southern Illinois… Earned Valparaiso University Presidential Academic Honors Award, MVC Commissioner’s Academic Excellence Award and MVC Academic Honor Roll.

2020: Had a team-best 2.48 ERA over four games out of the Valpo bullpen… Struck out 16 against six walks over 19 innings, sharing the team’s heaviest workload… Limited opponents to a .236 batting average… Struck out 11 while walking just one in six innings on Feb. 28 at McNeese.

Before Valpo: Was a four-time baseball state qualifier in high school… 2019 WIAA state baseball semifinalist… Earned 2019 Southern Lakes First-Team All-Conference honors… Member of the 2019 all-area first team… Also earned all-county and all-district recognition… Was a three-year letter winner in baseball and two-year letter winner in basketball… Played travel ball for Hitters Baseball (2016-2019)… Was the winning pitcher in the 2019 ABC Championship at Grand Park in Westfield, Ind… Was a 2018 and 2019 AP Scholar for his performance on AP tests… Member of National Honor Society… Earned Honor Roll every semester… Played in the Little League World Series Regional Tournament on ESPN twice when he was 11 and 12.

Personal: Majoring in actuarial science… Is the son of Jonn and Jen Turzenski… Has a sister, Alyssa… Favorite food is BBQ wings, movie is Step Brothers, MLB team is the Milwaukee Brewers, MLB Player is Josh Hader, musical group is Luke Combs and TV show is Friday Night Lights.