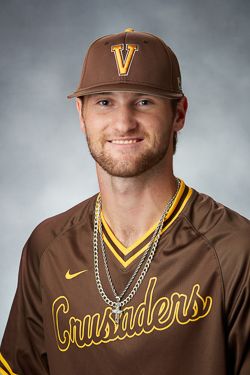 2020: Made four relief appearances and compiled a 3.38 ERA during the COVID-19 shortened season… Allowed one run over 2 2/3 innings… Retired the side in order in his inning of work in his season debut on Feb. 15 at Western Kentucky and did the same in his final appearance of the year on March 6 at Georgia Southern.

2019: Pitched 12 innings over five appearances and two starts during a season that was cut short by an injury suffered in late March… Worked 2 2/3 scoreless innings in his season debut on Feb. 24 at Arkansas State… Needed only three pitches to retire the only batter he faced on March 3 at UNCW… Made starts on March 5 at North Carolina A&T and March 12 at Tennessee Tech before making his final appearance of the season out of the bullpen on March 24 vs. Butler.

2018: Worked 32 1/3 innings while making five starts and seven relief appearances for the 2018 Crusaders… Best performance of the year came on May 13 at Illinois State, when he did not allow a run and permitted only one hit in three innings out of the bullpen.

2017: Worked in 11 games and started seven times during his rookie campaign... Finished with a 3.29 ERA and 1-2 record while walking 21 and striking out 18 in 27 1/3 innings... Pitched a scoreless inning in his collegiate debut on March 3 at Jacksonville, picking up his first career strikeout... Made his first career start on March 7 vs. Penn and did not allow a run over six innings while striking out four, but received no decision... Ran his scoreless innings streak to 10 1/3 after shutout relief performances on March 11 at USF and March 19 at Wright State... Allowed just an unearned tally in a four-inning start on March 21 at Chicago State. Had worked 14 1/3 collegiate innings and still held a 0.00 ERA at that point... Notched his first career victory on April 18 vs. Chicago State.

Prep: Four-year letter winner at St. Joseph’s… Won 15 high school letters, four in baseball, four in volleyball, four in golf and three in badminton… Academic honors all four years of high school… Was his school’s Athlete of the Year as a sophomore, junior and senior… Played travel ball for the Great Lake Canadians.

Personal: Son of Laurie and Richard Mommersteeg…Has one sister, Maureen, who played college hockey for Laurier (Waterloo, Ontario) from 2009-2012... Father Richard played collegiate and semi professional soccer. He played at the University of Western Ontario. He won a Western bronze medal in his junior year for displaying exceptional athletic abilities. He then signed with the London Lasers of the Canadian Soccer League and played against teams like the Vancouver WhiteCaps and Toronto FC before they were promoted to MLS.... First Canadian baseball player in Valpo history… Interests include hockey, basketball and traveling… Favorite food is Canadian Bacon… Favorite movie is Dazed & Confused… Favorite professional baseball team is the Toronto Blue Jays… Favorite MLB player is Marcus Stroman… Favorite musical group is Sum 41… Born on March 3, 1998… Majoring in criminology/sociology...  Played junior hockey until his junior year of high school, playing against the likes of NHL players Clayton Keller, Travis Konecny and Connor McDavid… Has played with Indiana State catcher Max Wright and was in the same program as Indiana State pitcher Ty Whitbread, Bradley outfielder JF Garon and trains in the offseason with Illinois State pitcher Dalton Harvey, who also played in the same program as Mommersteeg.