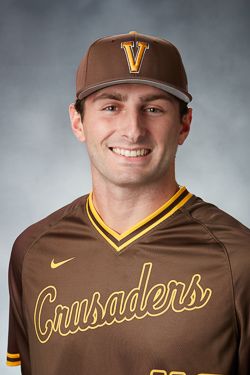 2020: Made seven appearances, all in relief, during the COVID-19 shortened season… Logged nine innings and notched 16 strikeouts… Did not allow an earned run in three different outings including a three-inning stint in which he yielded just one hit and struck out six on March 1 at McNeese.

2019: Did not allow a run in 1 1/3 innings of relief on March 23 vs. Butler, helping Valpo to a 5-2 win…. Turned in two scoreless innings in a road game against Big Ten foe Purdue on March 26, walking none and yielding just two hits… Needed only two pitches to retire the only man he faced in the finale of a series at DBU on March 31… Picked up his first win of the season with two scoreless frames out of the Valpo bullpen on April 6 vs. Illinois State… Turned in a quality long relief outing on April 20 vs. SIUE, allowing just one run over five frames at SIUE. He exited in a 3-3 tie, but Valpo went on to fall 4-3… Retired both batters he faced out of the bullpen on April 23 at Notre Dame, working out of an inherited jam... Made his first start of the season on April 28 vs. Evansville, turning in a quality outing by allowing just one run on five hits and two walks over six frames. He received no decision after leaving the game in a 1-1 tie… Garnered the win with seven innings of one-run ball on May 12 vs. Southern Illinois, permitting five hits and three walks while striking out five in the quality start. His effort helped Valpo prevail 4-1 to secure its first-ever sweep in Missouri Valley Conference play.

2018: Led the team in ERA at 3.20 while going 3-2 with 18 strikeouts in 39 1/3 innings of work… Made 24 appearances (two starts) during his first season on campus… After a slow start that saw him hold a 13.50 ERA over his first four appearances, had a 1.35 ERA in 33 1/3 innings over his final 20 appearances of the season… Did not allow an earned run over 13 innings from March 4 – April 17, then did not allow any runs in 15 innings from April 28 to May 23… Had a heroic effort out of the Valpo bullpen in a 13-10 win over DBU on May 23 in the first round of the MVC Tournament, sending down the first 10 batters he faced and allowing just one run on two hits in 3 2/3 innings of relief. Achieved the win in the upset victory over the Patriots.

2017 (St. Joseph’s College): Started his collegiate career at St. Joseph’s in Rensselaer, Ind., which closed its doors at the end of the 2017 season.