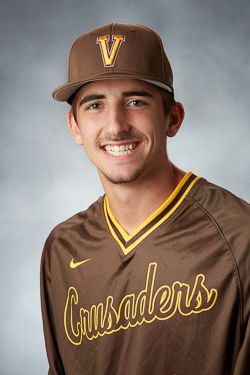 2022: Logged 11 1/3 innings while appearing in nine games out of the Valpo bullpen... Struck out eight against just two walks... Worked a scoreless inning on Feb. 18 at Memphis, two shutout frames on March 15 at Notre Dame and a shutout innings on May 19 at Evansville... Earned Valparaiso University Presidential Academic Honors.

2021: Appeared in four games and logged 3 1/3 innings while yielding one run (earned) on two hits, two walks and two strikeouts for a 2.70 ERA… Made his season debut on Feb. 20 at UAB… Worked a scoreless inning on May 14 vs. Evansville and again on May 21 in the second game of a doubleheader at Missouri State… Earned Valparaiso University Presidential Academic Honors Award, MVC Commissioner’s Academic Excellence Award and MVC Academic Honor Roll.

2020: Made two appearances during the COVID-19 shortened season… Did not permit a hit or a run in his collegiate debut while striking out three on Feb. 29 vs. Southern Miss.

Before Valpo: Was a 2019 Indiana All-Star while earning all-state honors and NIC second-team all-conference recognition… Also earned NIC second-team all-conference in 2017… Set his high school’s record for career wins with 20 and career stolen bases with 63… Earned four varsity letters in baseball plus three in basketball and two in football… Was an all-NIC selection in basketball in 2019 and a football second-team all-conference choice… Played travel ball for the Mishawaka Mayhem (2011-2013), the Indiana Shredders (2014-2017), the Michiana Scrappers (2017-2018) and the Indiana Chargers (2018-2019)… Member of National Honor Society, the IHSAA Student Leadership Committee and Champions Together.

Personal: Majoring in business… Son of Jason and Kelley Jablonski… Has a sister, Sydney Jablonski and a brother, Ryan Lewis… Birthday is Sept. 1… Hobbies include golfing and dog walking… Favorite food is salmon, movie is Dumb and Dumber, pro baseball team is the Chicago Cubs, MLB player is Javy Baez, musical group is Zac Brown Band and favorite TV show is It’s Always Sunny in Philadelphia.