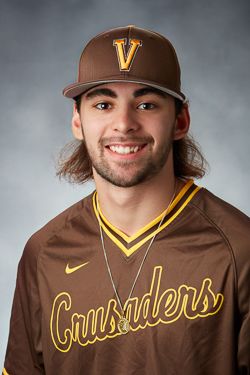 2020: Played in 13 games and made 12 starts during the COVID-19 shortened season… Had five hits including one triple and scored two runs while drawing five walks and being hit by a pitch twice… Had two multi-hit games – Feb. 22 at No. 3 Louisville and March 8 at Georgia Southern… The March 8 game at Georgia Southern included his lone triple of the season and the fourth of his career… Was featured in the MVC Scholar-Athlete Spotlight on March 4.

2019: Had a breakout junior season, playing in 49 of the team’s 50 games and making 45 starts after playing in just 16 games and making three starts as a sophomore… Went from a career .195 hitter with one double over his first two seasons to batting .268 with nine doubles… Finished fourth on the team in batting average and RBIs while tying for second on the team with nine doubles… Went 4-for-4 in Game 2 of a doubleheader on March 23 vs. Butler, helping his team to a 5-2 victory. Accounted for four of the team’s nine hits while enjoying a career day at the dish… Enjoyed a 3-for-3 day and drove in Valpo’s lone run of the game on April 5 vs. Illinois State… Belted his first career home run in an 8-0 win over SIUE on April 19 in Edwardsville… Batted .429 over a three-game sweep of Southern Illinois from May 10-12 to lead the team… Collected three hits and drove in two in a 4-3 win over Chicago State on May 14.

2018: Played in 16 games and made three starts as a sophomore… Notched a base hit in his only at-bat of the second game of a doubleheader at LMU on March 11, also registering his lone RBI of the year in that contest… Two of his three starts came against Big Ten competition – at Michigan State and at No. 25 Illinois… Valpo was victorious all three times he was in the starting lineup.

2017: Played in 28 games and made 14 starts during his freshman year at Valpo...Had a hit, walk and run scored in his collegiate debut on Feb. 17 at Western Kentucky... Started the first 13 games of the season... Had his first career triple on Feb. 19 at Western Kentucky... Enjoyed his lone multi-hit game of the year on Feb. 24 at UAB by going 2-for-3.