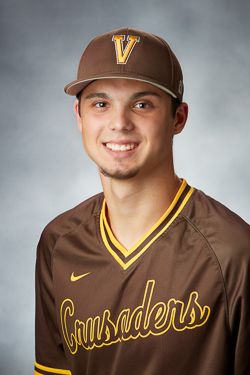 2021: Led the team in league-only batting average at .313 in his 19 MVC games (18 starts)… Reached base at a .387 clip in MVC play… Ranked third on the team in overall batting average at .265 while appearing in 31 games and making 28 starts… Ripped four doubles and a triple while driving in 15 and scoring 14 times… Also drew seven walks and was hit by a pitch on nine occasions… Cut down nine would-be base stealers… Had seven multiple-hit performances including a season-high three knocks in the May 1 game vs. Illinois State, the middle of a string of three consecutive multi-hit outputs… Drove in four and posted a .455 batting average during Valpo’s series win over SIU (April 23-25).

2020: Had the highest batting average on the team at .348 in a limited sample size during the COVID-19 shortened season… Played in seven games and made six starts, driving in a run and scoring one while lashing eight hits including two doubles… Had his first multi-hit game in a Valpo uniform on March 7 at Georgia Southern… Notched a season-high three hits in his first game of the season on March 11 at Alabama State including one double.

Before Valpo: Earned second-team all-conference honors as a high school sophomore before making his way onto the all-conference first team as a junior… Also earned first-team all-area and all-state recognition during his junior campaign… Was again named first-team all-conference, all-area and all-state as a senior while helping his team to the 2019 3A sectional championship… Earned a spot in the 2019 Indiana North/South All-Star Game… Was a four-year letter winner in baseball while also earning two varsity letters in tennis, where he was an all-conference honorable mention choice in 2017… Played travel baseball with the Fort Wayne Spiders (2012, 2015), the AWP Cubs (2016) and the Fort Wayne Kekiongas (2018)… Was a member of academic honor roll in 2018 and 2019.