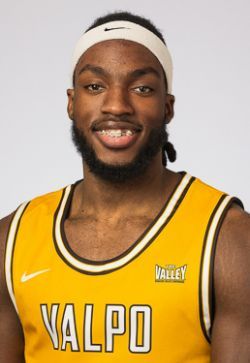 2021-22: Named the captain of the MVC All-Bench Team and to the MVC Most-Improved Team following his sophomore season... Appeared in all 32 games and made 10 starts... Averaged 11.4 points and 4.2 rebounds per game while leading the squad in steals (36), blocked shots (26) and made 3s (tied for team lead, 67)... Shot the 3 at a 35.8 percent clip while shooting 77.9 percent from the free-throw line. Hit triples at a 37.5 percent rate in MVC play, the best on the team, while posting an 82.9 percent free-throw clip in league play... Tied for ninth in the MVC in made 3s per game at 2.1... Scored in double figures 20 times including three performances that featured 20 points or more... Led the team in scoring four times and rebounding on three occasions... Scored in double figures in eight of the season’s final 10 games after starting the year with a seven-game double-figure streak... Boosted his numbers from his freshman year to his sophomore year in each of the following categories: scoring average (8.1 ppg to 11.4 ppg), blocked shots (seven to 26), rebounds per game (2.9 to 4.2), steals (24 to 36), field-goal percentage (.383 to .414), 3-point percentage (.300 to .358) and free-throw percentage (.735 to .779). He had 20 double-figure scoring outputs as a sophomore after having nine as a freshman... Finished the regular season as one of three MVC players with 30 or more steals and 20 or more blocked shots (Illinois State’s Kendall Lewis and Drake’s Tucker DeVries)... Became the first Valpo player to finish a season as the team leader in both steals and blocked shots since Raitis Grafs in 1999-2000... Finished the regular season as one of seven players nationally with 25 blocks, 30 steals, 35 assists and 60 made 3s... Became just the third different Valpo player to notch 20 blocks, 30 steals, 30 assists and 50 made 3s in a season since 1992-93, joining Ryan Broekhoff (three times) and Lubos Barton (twice)... Named to the Nassau Championship All-Tournament Team after lifting Valpo to a third-place finish. Was one of five players in a talented, eight-team field named to the all-tournament squad by averaging 16.0 ppg over the three games, including 23 points, five made 3s, five rebounds, three blocked shots and three steals in the third-place game vs. Tulane on Nov. 24... Posted his first career double-double on Feb. 19 at Evansville, scoring 11 points to go along with 11 rebounds... Had his second straight double-double on Feb. 21 vs. Evansville, scoring 13 points to go along with a season-high 12 rebounds... Scored a season-high 23 points on two occasions, the aforementioned game against Tulane and Feb. 16 vs. Loyola. Both of those games featured five made 3s, also a season high.

Personal: Majoring in sports management… Hobbies include listening to music… Favorite artists are Drake and J. Cole… Son of Sheldon Edwards Sr. and Leticia Graham… Has six siblings – sisters Kham, Kiarra, Aaniyah, Jayden and brothers Joshua (14) and Elijah (10)... Favorite NBA player is Steph Curry, but he models his game after the likes of Devin Booker, Jayson Tatum and Bradley Beal. When he’s not playing basketball, the he spends much of his free time watching it.