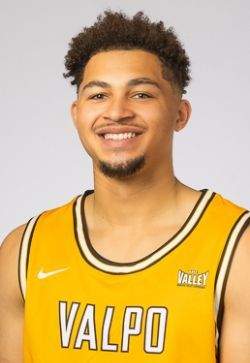 2021-22: Played in 23 games and made 22 starts after sitting out the first nine games to gain NCAA eligibility... Earned MVC All-Newcomer Team status... Averaged 14.0 points, 4.7 rebounds and 1.3 assists per game... Had a three-quarters court buzzer-beater on Dec. 11 vs. Charlotte, a play that ranked No. 9 on SportsCenter’s Top 10 plays that evening... Scored in double figures 19 times and led the team in scoring on seven occasions and rebounding four times... Achieved season highs in both points (24) and rebounds (11) on Feb. 5 vs. Indiana State... Enjoyed his second double-double of the season with 12 points and 10 boards on Feb. 21 vs. Evansville... Ranked 13th in the MVC in scoring, 10th in offensive rebounds per game and 10th in minutes per game.

2019-20 (Wisconsin): Started all 19 games he played and averaged 10.0 points per game… Averaged a team-high 12.6 points per game during Big Ten play over nine contests, all starts… Shot a robust 52.2 percent from the floor in conference action, hitting 48 of his 92 attempts… Scored a career-high 24 points in a victory over Indiana on Dec. 7… Followed that up with an 18-point output at Rutgers on Dec. 11… Poured in 21 points on 10-of-13 shooting on Jan. 8 against Illinois… Finished his Wisconsin tenure having seen action in 63 games and making 20 starts.

Personal: Parents are Chris King and Julie Platten… Favorite basketball memories to this point are winning the state title as a high school senior and a 64-54 upset victory over No. 2 Michigan on Jan. 19, 2019 in Madison. Michigan entered the matchup with a 17-0 record. King saw 31 minutes of action and had six points and five rebounds…. Pursuing a degree in sociocultural studies of sport, health, and the body… Enjoys making music and writing song lyrics.