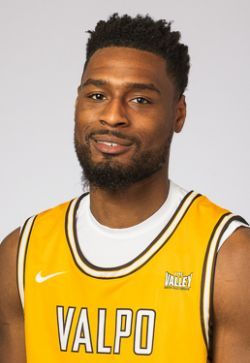 2021-22: Played in all 32 games and made 28 starts... Averaged 12.8 points per game while shooting 38.3 percent from 3 and 80.7 percent from the free-throw line in his lone season at Valpo... Tied for the team lead with 50 assists and finished second on the squad in steals with 29... Scored in double figures 19 times to finish his collegiate career with 100 double-figure scoring outputs... Led the team in scoring on eight occasions... Finished ninth in the MVC in made 3s per game at 2.1 and was fifth in the league in minutes per game at 34.5... Had an impressive streak of 84 consecutive games with a made 3-pointer end on Jan. 30, 2022 at Southern Illinois after he had extended the streak to 84 with a made 3 as time expired on Jan. 26 vs. Bradley... Made a season-high five 3s on three occasions – Nov. 23 vs. Coastal Carolina, Jan. 10 vs. UNI and Feb. 9 at Illinois State... Scored 20 points or more on five occasions including a season-high 26 on Feb. 9 at Illinois State... Dished out a season-high five assists on Jan. 15 at Missouri State and grabbed a season-high six rebounds three times... Scored a team-best 16.9 points per game in the month of February, a scoring average that ranked sixth in the MVC in that month... Scored his 2,000th collegiate point on Feb. 23 vs. Drake, becoming just the third player in program history to score his 2,000th collegiate point while playing for Valpo, joining Alec Peters and Bryce Drew. Became the 27th active player at all levels of NCAA basketball to reach that milestone.

2020-21 (Winona State): Started all 13 games during the COVID-shortened season… Led the team in scoring at 20.5 points per game while posting an .892 free-throw percentage, knocking down a team-high 35 3s and ranking second on the squad in rebounding at 5.8 per game… Ranked third in the conference in scoring while also ranking 19th in rebounding, third in 3-point field goals per game, fifth in 3-point field goal percentage, 18th in field-goal percentage, third in free-throw percentage and fifth in minutes per game (34.9)… Posted a season-high 30 points on Feb. 5 against Minnesota State… Scored in double figures in 12 of his 13 contests and had 10 outputs of 20+ points… Drained seven 3s on both Jan. 23 against Augustana and Feb. 6 vs. Minnesota State… Had a season-high nine rebounds on two occasions, Jan. 17 against Upper Iowa and Jan. 20 against Wayne State (NE)… Ranked 31st nationally in NCAA Division II in free-throw percentage… Finished his Winona State career with 1,632 points, cracking the Top 10 in program history… Started 73 of 74 games over his final three seasons at Winona State… Started the year as the NSIC South Division Preseason & Postseason Player of the Year and finished it as a First Team All-NSIC choice.

2017-18 (Winona State): Burst onto the scene as a freshman, playing in all 29 games… Made 17 starts, including each of the final 15 games... Played 21.4 minutes per game... Averaged 9.6 points and 4.9 rebounds per contest... Totaled 42 assists with a season-best seven vs. Moorhead... Recorded 15 double-digit scoring efforts... Posted a season-best 21 points vs. SMSU while knocking down a season-high four 3-pointers... First career double-double came vs. SMSU with 11 boards... Shot 48.2 percent from the field and 36.3 percent from downtown... Shot 80.4 percent from the free throw line… Won the school’s Male Freshman Athlete of the Year Award.

Personal: Son of Kevin Taylor and Geneka Walton… Graduated from Winona State with an undergraduate degree in communication and is pursuing a master’s in sports administration at Valpo.