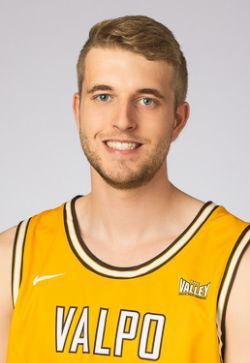 2021-22: Named to the All-MVC Third Team for a second straight season while also earning MVC Scholar-Athlete First Team honors for the second consecutive year... After missing the first three games of the season due to an ankle injury, started the remaining 29 contests... Averaged a team-high 14.2 points per game while shooting 53.9 percent from the floor, 84.3 percent from the free-throw line and squeezing 4.5 rebounds per outing. Also blocked 23 shots and swiped 23 steals... One of three players in the MVC to shoot 50 percent or better from the floor and 80 percent or better from the free-throw line, joining Isiaih Mosley of Missouri State and Malevy Leons of Bradley while owning the highest field-goal percentage of that elite group... Finished his junior year with 974 career points, 26 away from 1,000... Finished the season with a career field-goal percentage of 53.4, a mark that ranks seventh in the program record book... Ranked 11th in the MVC in scoring average, eighth in field-goal percentage and fifth in free-throw percentage... Scored in double figures 22 times including a 12-game double-figure streak that was snapped in the final game of the season, the MVC Tournament quarterfinal vs. Missouri State... Had seven performances with 20 points or more and paced the team in scoring on 11 occasions... Led the team in rebounding eight times... Scored a season-high 26 points on Nov. 27 vs. Trinity Christian and posted his D-I high of 25 in his season debut on Nov. 22 vs. Jacksonville State in the Bahamas... Corralled a season-high nine rebounds on Jan. 30 at Southern Illinois... Gave out a season-high five assists twice, Jan. 26 vs. Bradley and Feb. 19 at Evansville.

2020-21: Earned MVC Scholar-Athlete First Team, MVC Most-Improved Team and All-MVC Third Team, the only player in the conference to receive all three honors… Also named to the CoSIDA Academic All-District First Team, one of six honorees in District 5 spanning the states of Illinois, Indiana, Michigan and Ohio, becoming the third player in program history to achieve that honor, joining Alec Peters (three times) and Dan Oppland (twice)… Featured in the MVC Scholar-Athlete Spotlight on Dec. 16… Started all 28 games, the only Valpo player to do so… Led the team in scoring both overall (12.3 ppg) and in conference-only action (13.1 ppg)… Boosted his scoring average by 5.6 ppg from the previous season… Is on pace to become a 1,000-point scorer as he has 563 career points through two seasons…Shot at a 51.9 percent clip overall and 52.7 percent mark in conference play… Ranked eighth in the MVC in free-throw percentage at 79.7 and ninth in blocked shots with 23… Scored in double figures 21 times during the season including seven of the team’s last eight games… Led the team in scoring nine times and paced the squad on the glass in five contests… Made his second career start and first against a Division-I opponent in the Nov. 27 season opener at Vanderbilt. Finished with 13 points, all in the second half, in a career-high 34 minutes... Scored in double figures in each of the first two games of the 2020-21 season (at Vanderbilt, at UIC), the first set of back-to-back double-figure outputs in the sophomore’s collegiate career. His second straight double-figure showing featured 11 points on an efficient 4-of-5 shooting on Dec. 1 at UIC... Had his fourth double-figure scoring output in the season’s first six games with 12 points to go along with a career-high three blocked shots on Dec. 12 at Central Michigan... Posted 16 points and seven rebounds on 8-of-11 shooting in the Dec. 19 game at Toledo. The eight field goals marked a career high and the 16-point game was two shy of a personal best at that time... Shattered his previous season high by halftime with 17 first-half points on Jan. 9 vs. Missouri State on his way to a career-high 21. He joined Javon Freeman-Liberty, Tevonn Walker and Alec Peters as the only four Valpo players with 17+ points in a first half during Matt Lottich’s head coaching tenure (fifth season)... Became just the third Valpo player in the last 25 years with a 25-point, 15-rebound game on Jan. 24 at Illinois State... Was named the Missouri Valley Conference Player of the Week on Jan. 26, the first weekly conference honor of his collegiate career... Enjoyed his third straight game of 18+ points by scoring 18 on 7-of-9 shooting to lead the team on Jan. 31 at Evansville, then equaled a career high with four assists on Feb. 1 in the second game of the back-to-back against the Purple Aces... Scored in double figures for the 20th time this season in the Feb. 27 regular-season finale, scoring 14 points in the win over Indiana State… Rounded out his season with a 12-point performance in the MVC Tournament opener on March 5 vs. Missouri State… Received Valparaiso University Presidential Academic Honors and member of MVC Academic Honor Roll.

Prep: Led Jasper Place H.S. to the Alberta Schools’ Athletic Association provincial championship… Earned a spot on the BioSteel All-Canadian game roster… Was the MVP of the Alberta Basketball All-Star Showcase, scoring 37 points… Competed internationally for Team Canada at the 2018 FIBA U17 World Cup in Argentina, averaging 9.9 points per game and 4.4 rebounds per game while helping Canada to a fourth-place finish. He was the only player from outside of Quebec or Ontario to make the roster... Has played against NBA players like Jalen Green, James Wiseman and Scottie Barnes.

Personal: Loves to go hiking and see wildlife when he’s home in Edmonton... Enjoys using the ESPN app to watch the Edmonton Oilers play, giving him a piece of home... Has several friends who are highly successful business people... Does a lot of biking to stay in shape when he’s back home, will be out for an entire morning and go 40 miles...  Father Kent is a physical education teacher and former college basketball player. He has run a basketball camp in Alberta for over 20 years... Hobbies include fishing with his dad and cheering on the Toronto Raptors, his favorite pro team... Majoring in finance... Hails from Edmonton, a very devout hockey city, but says basketball there is on the upswing... Never played ice hockey, but did compete in badminton, volleyball and various track & field events... Enjoys mountain biking and chess, which he learned from his grandfather.