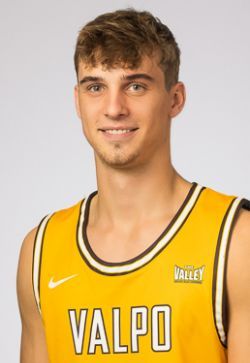 2021-22: Joined the program as a nonscholarship player... Initially planned to redshirt but instead used a season of eligibility, making his season debut on Dec. 20 vs. Eastern Michigan... Appeared in 19 games and made 13 starts... Averaged 3.3 points, 1.5 rebounds and 1.7 assists per game... Named to the MVC All-Freshman Team... Did not make more than one turnover in any of his 19 contests and played turnover-free basketball on 11 occasions... Finished the season with 32 assists against just eight turnovers... Was the only player in the nation with 30 or more assists and fewer than 10 turnovers... Had a season-high four assists on three occasions – Dec. 20 vs. Eastern Michigan, Jan. 8 vs. Southern Illinois and Feb. 16 vs. Loyola... Made his first career start in the Jan. 8 game vs. Southern Illinois, becoming the second Valpo walk-on to start during the Matt Lottich Era (John Kiser)... Turned in eight points in each of the matchups with Loyola, Jan. 11 in Chicago and Feb. 16 at the ARC... Scored a season-high 12 points including three made 3s in the March 3 MVC Tournament opening-round game against Evansville. All of his scoring came in the first seven minutes of the game.

Prep: An Associated Press First Team All-State Selection in 2020-21… Led Lourdes to its first WIAA state championship by averaging 25.8 points, 6.9 rebounds, five assist and 2.5 steals per game… Third Team All-State choice as a junior in 2019-20 after averaging 27.2 points per game… Shot 3-pointers at a 45.3 percent clip throughout his career and is 12th on the state of Wisconsin’s all-time scoring list with 2,349 career points… Team won a state championship on a buzzer-beater that capped off a 20-point comeback in 2020-21… His high school coach was his father, Dennis… Also competed in football and golf and was a two-time first-team all-league wide receiver on the gridiron.

Personal: Is an avid golfer in his spare time… Pursuing a degree in business… Has an interest in coaching in the future… Son of Dennis and Kellie Ruedinger.