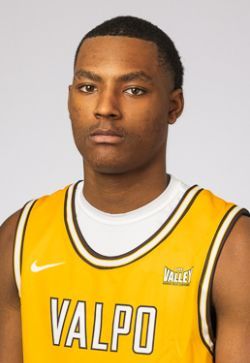 2021-22: Played in eight games before missing the remainder of the season with a wrist/thumb injury... Provided a major lift off the bench in the Nov. 24 third-place game of the Nassau Championship vs. Tulane, chipping in seven significant points on a pair of made 3s including a four-point play... Reached double figures for the first time in his collegiate career with 13 points and seven rebounds on Nov. 27 vs. Trinity Christian. That performance included his first collegiate dunk... Came off the bench and contributed eight points including a pair of made 3s in the Dec. 5 win at Western Michigan... Did not play after Dec. 5 due to a wrist/thumb injury.

Prep: Named the Super 5 Player of the Year by the Oklahoman following his senior season in 2020-2021… Scored 26 points in the 6A Oklahoma state championship game to lead Del City to its first basketball state title since 1980, a 47-44 win over Edmond Memorial… Helped his high school team finish his senior season with 16 straight wins including the state title game… Named to the Big All-City First Team by the Oklahoman after averaging 20.0 points per game as a senior… Also named to the Oklahoman Super 5 First Team and 6A All-State following his senior season… Team finished as the state runner-up during his sophomore season in 2018-19 and was in line to win the state title during his junior campaign in 2019-20 before the season was cut short by the COVID-19 pandemic… Del City was 24-1 at the time of the COVID-19 stoppage in 2019-20 and was ranked No. 1 in the state of Oklahoma after winning every tournament it participated in… Earned All-State Honorable Mention as a junior after averaging 12.8 points per game… Named Faith 7 Basketball Bowl (Oklahoma vs. Texas) Team Oklahoma MVP after a 17-point, nine-rebound performance… Earned Oklahoma Basketball Coaches Association Player of the Year honors.