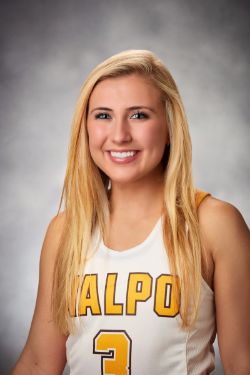 2017-18: Started in Valpo’s season opener for the third consecutive year... Played in just two games before missing the remainder of the season with an injury… Enters her redshirt junior season already 17th in program history in career assists with 237.

2016-17: Appeared in all 31 games, one of two players to do so, and made 30 starts for Valpo. Averaged 3.5 points, 2.9 rebounds and 4.3 assists per game... Led the team in assists for the second straight year, finishing with 134... Matched a career-high with five made field goals and finished in double figures for the only time this season and the fourth time in her career with 12 points at UIC on Jan. 28... Dished out nine assists on two occasions - Nov. 25 against Liberty and Dec. 3 against Eastern Illinois... Her 134 assists in a single season rank seventh in program history and are the most by any Valpo player in the last 17 years... Entered her junior season already 17th in program history in career assists with 235... Ranked eighth in the Horizon League in assist/turnover ratio (1.5) and 11th in assists per game (3.3)... Led the team in assists in 18 games.

2015-16: Appeared in all 31 games, including 28 starts in her freshman season...paced the team in assists (101) and steals (32) as a rookie...dished out a team-high four assists to go with six points and a steal in her collegiate debut at Butler on Nov. 13...caught fire against Northern Colorado (Nov. 28), sinking five of her seven 3-point attempts to finish with a team-high 15 points... rattled off nine assists - opposite two turnovers vs. IU-Northwest (Dec. 12)...went 4-for-5 from 3-point range and led Valpo with four assists in its 94-91 OT win over Detroit in the Horizon League Championship opener on March 10...eclipsed the 100-assist plateau in the season finale versus Northern Kentucky as she distributed five dimes against the Norse (March 11)... Won the team's Most Improved Player Award.

Prep: A five-year letter winner, Schaub was a varsity starter since eighth grade, a season in which she was named Honorable Mention All-Northwest Suburban Conference. She served as a two-year captain and was a First Team All-Conference player from 9th-11th grade. Schaub starred as point guard of the 2013-14 State AAA Champion Park Center Pirates. An excellent all-around athlete, she also stood out on the soccer and softball fields. She was a varsity soccer starter from 8th-11th grade and was a two-time varsity starter with softball. Park Center captured a State AA Championship during her eighth-grade season.

Personal: Daughter of Diane and Charlie Schaub... Born on May 22, 1997... Member of Student-Athlete Advisory Committee... Older sister Nicole played basketball at the University of Wisconsin-Stout and younger sister Danielle is a sophomore on the basketball team at Concordia University, St. Paul... Is majoring in marketing with minors in business analytics and communication.