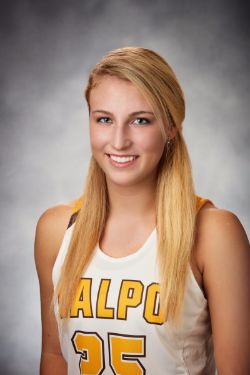 2018-19: Appeared in 32 games and made 27 starts as a junior… Averaged 10.9 points, 3.4 rebounds and 31.6 minutes per game, one of three Valpo players to average in double figures in scoring… Ranked second on the team with a conference scoring average of 12.2… Went 73-of-85 at the free-throw line to finish the season with a free-throw percentage of .859, which ranked tied for second in program history… Enters her senior season with a career 3-point percentage of .358, which ranks tied for eighth in program history… Led the team with a 3-point field goal percentage of .377… Ranked 20th in the MVC in scoring, 13th in field goal percentage (.431, led team), fourth in free-throw percentage, seventh in 3-point percentage and 10th in minutes played (31.6, led team)… Scored all 12 of her points in the second half to become one of four Valpo players in double figures on Nov. 14 at Illinois... Made her first start of the season on Nov. 26 against Toledo… Had her best day in a Valpo uniform on Dec. 2 vs. Eastern Illinois with 21 points, seven made field goals, three made 3s, seven rebounds, two assists and one turnover... Hit a key 3-pointer in the final minute of a four-point win at Purdue Fort Wayne on Dec. 19 to cap a 17-point output... Buried five 3s on Dec. 21 vs. Bowling Green to lead the team and contribute to the team’s total of 17, which equaled a school record. That matched a career high and marked the third time in her career Hales hit five 3s in a game... Finished three points shy of a career high with 18 on Jan. 13 at Drake. She scored 15 of those points in the second half on her way to equaling a career watermark with seven made field goals. She also set career bests in assists (4) and steals (4) in a game against a team receiving votes nationally... Matched a career high with 21 points on Jan. 20 vs. Evansville. She knocked down eight of her nine field-goal attempts, tying for sixth in program history for single-game field-goal percentage... Equaled a career high and set a season best with nine rebounds on Feb. 1 vs. Bradley... Had her third 21-point game of the season, again matching a career high on Feb. 3 vs. Illinois State... Made five 3s in a single game for the fourth time in her career and the second time this season on Feb. 8 vs. Drake. Led the team in both scoring (17) and rebounding (8) in that game, the first time she had paced the squad in both categories in the same game in her career... Equaled a career high with nine rebounds while scoring in double figures for the seventh time in eight games with 10 points on Feb. 15 at Evansville... Had a streak of 26 consecutive made free throws that spanned 13 games including 11 straight contests without a miss. The streak started in the conference opener on Jan. 6 at Loyola and didn’t come to an end until Feb. 17 at Indiana State... Led the team in scoring with 18 points on Feb. 28 at Bradley.

2017-18: Appeared in all 31 games and made one start… Averaged 8.0 points per game, third on the team and second among returnees for 2018-19… Second on the team in free throw percentage at .863… Led the team with a .384 3-point percentage (43-112)… Made a career-high five field goals while scoring 12 points – one shy of a career best – in the season-opening win over IU Kokomo... Drained a career-high of four 3-pointers to finish with 12 points in the first road game of the season on Nov. 21 at Miami (Ohio)... Is the only Valpo player who scored in double figures in the first three games of the season, the first stretch of three straight double-figure outputs in her career... Hit seven straight 3-point attempts on Dec. 2 at Liberty and Dec. 3 at Longwood, going 4-for-4 against the Flames before knocking down her first three triples against the Lancers. Scored a then career-high 14 points at Liberty, the only Valpo player in double figures in that game... Returned to double figures with 13 points on Dec. 18 at Eastern Illinois, her fifth double-figure game of the season... Made her lone start of the season and the second of her career on Dec. 29 at Drake... Matched a season-high with four rebounds in back-to-back games on Dec. 31 at UNI and Jan. 5 vs. Illinois State... Had a banner-day on Jan. 12 vs. Loyola, leading the team in scoring for the second time in 2017-18 with a career-high 15 points on 5-of-8 shooting... Had her seventh double-figure output of the season and second straight with 12 points on Jan. 19 at Missouri State... Matched a career-high by burying four triples on Jan. 21 at Southern Illinois, finishing the game with 16 points, her third straight contest in double figures... Enjoyed her fourth straight double-figure game with 10 points on Jan. 26 vs. Evansville... Pulled down a career-high nine rebounds and finished one board shy of a double-double on Feb. 11 in a comeback win at Loyola.

2016-17: Was a consistent force off the bench, contributing 5.5 points per game while making one start in 31 appearances... Knocked down three 3s in her Valpo debut, becoming the first Valpo freshman to do so in the last decade... Also made a good first impression in the Horizon League opener on Dec. 29, scoring a career-high 13 points at Detroit Mercy... Led the team in scoring on Feb. 16 against Oakland with 11 points. Scored seven of the team's 13 second-quarter points in that game... Finished the season second on the team in free-throw percentage at 81.4 after enjoying a stretch of 21 straight made free throws that spanned December, January and February... Was named the team's Sixth Player of the Year.

Prep: Averaged 19.2 points, 3.2 assists and 4.7 rebounds per game in her season at Westview… Led the Warriors to a 21-6 record and an appearance in the IHSAA Class 2A Girls Basketball State Tournament… Team captured four sectional titles in her four years of college… Was named all-state by both Indiana Coaches of Girls Sports Association (ICGSA) and the Indiana Basketball Coaches Association (IBCA)… Hales departed Westview as the all-time leading scorer (1,600 points), the single-season scoring record holder (513 points) and owning the single-game watermark for 3-pointers made (7).

Personal: Parents are Ross and Candace Hales... Born on April 8, 1998... Father Ross played football and basketball at Indiana University. He played for the Hoosiers during the 1993-1994, a team that was under the direction of coach Bob Knight... In high school, was a four-time all-conference performer in three different sports – basketball, volleyball and track and field... Participated in a spring tournament with the Valpo volleyball team during her freshman year when the volleyball squad was plagued by injuries and did not have enough healthy bodies to compete... graduated in May 2019 with a bachelor’s degree in communication ... currently working towards her master’s degree in sports media.