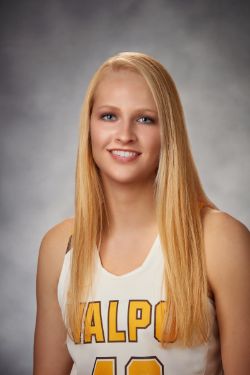 2018-19: Sat out due to an injury… Retained two seasons of eligibility.

2017-18: Made 29 starts as a sophomore… Averaged 4.0 points and 4.5 rebounds per game… Is Valpo’s leading returning rebounder for 2018-19… Led the team in steals with 1.2 per game and blocked shots with 1.3 per contest… Ranked fourth in the conference in blocks per game… Established a career watermark in assists (four) and had three steals in Valpo’s season opener against IU Kokomo.... Squeezed a career-high 10 rebounds on Nov. 21 at Miami (OH)... Turned away five shots on Nov. 25 against Grand Canyon, besting her previous single-game career best of two blocks. The fifth block sealed the win as it rejected a 3-point try that would have tied the game with less than 10 seconds left... Knocked down a pair of 3s on Dec. 18 at Eastern Illinois, her first game of the season with multiple makes from beyond the arc... Had a career-high four steals and knocked down a career-best five field goals while scoring a season-high 10 points on Jan. 26 vs. Evansville... Equaled a career high with four steals on Feb. 2 at Bradley... Led the team in rebounds with eight in the first round of the MVC Tournament on March 8 vs. Loyola… Led the team in points (11) and rebounds (7) in the final game of the season in March 9 MVC quarterfinal against Drake. Matched her career high in scoring in that game. Both of her 11-point performances have come in conference tournament games.

2016-17: Made an immediate splash during her freshman campaign, averaging 5.1 points and 4.2 rebounds per game while making 25 starts and seeing action in 29 games... Notched 12 blocks and picked up 25 steals... Reached double figures for the first time in her collegiate career with 10 points against Grace College on Dec. 10... Matched her season high in rebounds and established her season high in scoring in the first round of the Horizon League Tournament, posting 11 points and eight rebounds to help Valpo to a victory over Youngstown State... Named the team's Rookie of the Year.

Prep: Amassed 16.6 points, 7.1 rebounds and 54 3-pointers en route to Second Team All-State accolades as a senior at Glenbrook South High School in Glenview, Ill. Was a member of the 1,000-point club while being named to the Central Suburban League All-Conference Team… Was selected to the all-tournament team for both the Mundelein Thanksgiving Tournament and the Holiday Classic… Shot 55 percent from the field in 2015-16.

Personal: Parents are Scott and Karen Morrison... Born on Oct. 13, 1997... Father is a former Valparaiso men’s basketball player and played under Homer Drew from 1990-1992.... Is majoring in finance with a minor in business analytics... Volunteers for an organization called CAAEL, which participates in events held for special education and at-risk students around Illinois.