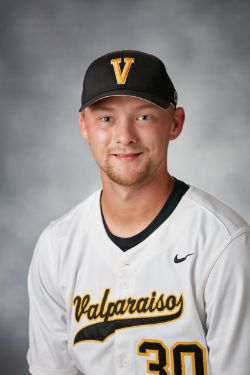 2015: Made 16 appearances out of the bullpen for Valpo in his junior campaign...assembled a 4.81 earned run average while walking just five batters in 24 1/3 innings...allowed a pair of unearned runs to San Diego State (Feb. 13) in the season opener against the Aztecs...blanked Gardner-Webb (Mar. 1) for three innings while punching out one Bulldog...struck out two batters while surrendering a lone run in two frames against Youngstown State (Mar. 20)...kept Wright State (Mar. 28) off the scoreboard for 1 1/3 innings while recording a strikeout...threw a season-high 3 1/3 innings at Milwaukee in Valpo's 11-10 12-inning victory on Apr. 2nd...registered a perfect side with a K at Oakland (Apr. 26)...turned in three scoreless frames versus Milwaukee (May 2) at Emory G. Bauer Field, striking out two and walking just one...registered two perfect innings of relief versus Youngstown State (May 10)...recorded two big outs in a one-run game at Wright State on May 14th.

2014: Pitched in 16 games for the Crusaders as a sophomore, making two starts...recorded a 2-2 record and a 3.51 earned run average in 33 1/3 innings pitched...blanked McNeese State (Mar. 1) for 1 2/3 innings while striking out two...worked a scoreless inning in relief at Notre Dame (Apr. 1)...received his first win of the season on Apr. 11th against Youngstown State after tossing an inning where he allowed a run...limited Ohio Northern (Apr. 22) to just two runs in six innings of his start against the Polar Bears, striking out five and walking just one...earned the win versus Chicago State (Apr. 30) after he surrendered just one run to the Cougars in six innings...did not allow an earned run in his last three appearances of the season.

2013: Made 10 appearances on the hill as a freshman including five starts...fired a scoreless inning in his collegiate debut at Long Beach State (Feb. 22)...earned his first college win against Yale on March 13th when he allowed two earned runs over 5 1/3 innings of work...threw a scoreless inning in relief versus UIC (Apr. 7)...allowed one run in two innings in his fifth start of the season against Goshen (Apr. 29)...didn't allow an earned run in an inning out of the pen versus Chicago State (May 7).

Personal: Trevor is the son of Mike and Ginger Haas...majoring in mechanical engineering...favorite movie is Miracle...favorite baseball team is the Chicago Cubs...favorite food is lasagna...favorite musical group is Eric Church...favorite baseball player is Anthony Rizzo...away from the diamond, he enjoys playing pick-up football or basketball...born on Nov. 23, 1993.