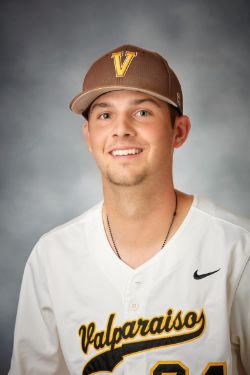 2016: Served as the Crusader backstop in 20 games, including 14 starts in his return from surgery...turned in a .327 batting average with two homers and 13 RBIs...belted a solo bomb at New Orleans (Feb. 28)...walked and drove in a run at Dallas Baptist (March 10)...crossed the plate three times after corking three hits at Chicago State (Apr. 20)...plated two teammates versus Milwaukee on April 23...walked, singled and touched home twice in the Crusaders' 13-10 victory over Purdue (May 11)...doubled home a run during a 2-for-2 day at Youngstown State (May 13)...enjoyed a career day versus Oakland on May 15, going 4-for-5 with two doubles, a dinger, three runs scored, eight RBIs, an afternoon that boosted his batting average from .308 to .364...was named Horizon League Batter of the Week for his performance...collected a hit versus Youngstown State on May 21.

2015: Missed the entire season with a medical redshirt.

2014: Made 40 starts in 41 games in his first full season as starting catcher for the Crusaders...ripped a double, drove in two and scored as part of a 2-for-4 day at the dish in his first game of the season at Samford (Feb. 14)...crossed the plate twice, walked and recorded a hit at Jacksonville State on Feb. 22...tallied an RBI single in the series finale against Jacksonville State the following day...went 2-for-3 with a pair of runs scored and a run driven in at McNeese State (March 2)...corked a two-bagger and plated two at Texas A&M-Corpus Christi (March 8)...registered 1-for-3 days with an RBI in each of the first two games of the Horizon League opener against UIC (March 21-22)...drove in a run at Butler (March 30)...knocked in a run via a double versus Wright State in the series finale on April 5...recorded a hit and a run scored in a pair of games against Youngstown State (April 11-12)...reached base twice at Henry Aaron Field in Milwaukee (April 18)...assembled a nine-game on-base streak from April 18 to May 10...set a season-high for hits in a game with three versus UIC (May 22) in the Horizon League Championship in Mequon, Wis.

2013: Appeared in 13 games including seven starts as a freshman...recorded his first collegiate hit and RBI versus Bucknell (March 14)...ripped three hits and two RBIs versus Wright State on March 23...drew a walk and had a hit in a start versus Purdue North Central (April 1)...went 2-for-3 with a pair of runs batted in and a run scored versus Roosevelt (April 17)...smacked a run-scoring single versus Goshen on April 29...drove in two runs with a single against Toledo (May 14)...finished season with a .370 batting average in 27 at-bats.

Personal: Jake is the son of Steve and Kim Hanson...major is sports management...born on March 21, 1994.