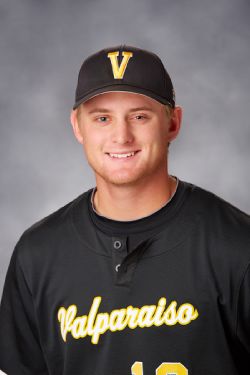 2014: Made nine relief apperances for Valpo as a junior...amassed a 1.38 earned run average while striking out 14 batters in 13 innings...allowed just one earned run after the month of March...struck out a pair of Wildcats in two hitless innings at Northwestern on April 8th...fired a scoreless frame versus Youngstown State (Apr. 12)...recorded three strikeouts in three shutout innings versus UIC on April 25th...racked up a season-high six Ks in two innings of work versus Chicago State (Apr. 25)...kept Youngstown State off the scoreboard for 1.2 innings in the opening game of the Horizon League Tournament (May 21)...closed out the season working a scoreless inning versus Wright State (May 23).

2013: Made 14 relief appearances for the Brown and Gold as a redshirt sophomore...threw a scoreless frame at Long Beach State (Feb. 23)...didn't allow an earned run against Toledo (Mar. 6) in an inning of work...held Wright State (Mar. 22) scoreless over 1 2/3 innings...struck out the only Milwaukee Panther he faced on March 29th...earned the win with 2 2/3 shutout innings versus Purdue North Central (Apr. 1)...worked a perfect inning against UIC (Apr. 5) before firing another scoreless frame against the Flames in the series finale (Apr. 7)...got the win at Youngstown State (Apr. 13)...struck out one in a scoreless inning against Wright State (Apr. 27)...threw a hitless inning in relief at UIC on May 10th...finished the season 2-0 with a 2.70 ERA...struck out seven batters in 13 1/3 innings.

2012: Appeared in 13 games out of the bullpen in his first season with the Crusaders...recorded first college win on April 5th at UIC, working three scoreless innings in a 8-7 15-inning victory...threw two perfect innings against Western Michigan on Apr. 10th...finished season with a 3.17 earned run average at Emory G. Bauer Field...struck out 21 batters in 21 innings.

Prep: A three-year letterwinner for the Bulldogs ... an All-Eastern Indiana Athletic Conference Selection as a senior ... team Most Valuable Player as a junior ... a Rawling All-American Midwest Region selection ... captained his 2010 team to #3 rank in Class 3A ... also lettered in football.