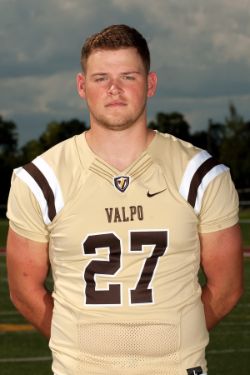 2014: Played in all 12 games at tight end for the Crusaders as a sophomore...caught a pass against St. Joseph's (Sept. 6)...returned a kickoff 18 yards at Dayton on Nov. 1st...registered a three-yard reception versus Butler in the Crusaders' 17-3 victory over the Bulldogs.

2013: Appeared in six games for the Brown and Gold at tight end in his rookie campaign.

Prep: A three-year letterwinner for Tim Kane and the Tigers...two-time All-Southwest Prairie selection...two-time All-Area recipient...captain and defensive MVP in 2012...holds school record for sacks in a game (3)...named to Honor Roll twice.

Personal: Brett is the son of Don and Donna Fox ... major is marketing.