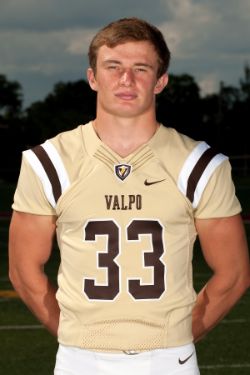 2017: Played in all 11 games and made 17 catches for 344 yards… Averaged 20.2 yards per catch, the most on the team, and hauled in a pair of touchdowns… Averaged 31.3 receiving yards per game… Had a season-high 154 receiving yards on three catches on Sept. 9 against Duquesne… Made an impressive 80-yard TD catch against the Dukes that was named the No. 7 play on the countdown of Valpo Athletics’ Top 10 Plays of 2017… The 80-yard reception was Valpo’s longest of the season and the longest for any Crusader since 2013… Had a season-high four receptions on Oct. 14 against Marist, totaling 109 yards. One of his catches against the Red Foxes went for 70 yards and a TD, the first of seven Valpo touchdowns in a 49-15 win at Brown Field.