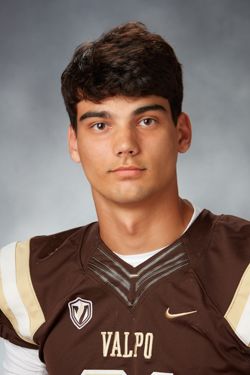 2019: Had 42 tackles in just eight games, 5.25 tackles per game… racked up five tackles for loss totaling 14 yards… Added one sack, one interception, five pass breakups and one fumble recovery… Made an interception in Week 1 against full scholarship foe Eastern Kentucky… Accounted for Valpo’s lone sack in a game at Truman State… Accrued six tackles and recovered a fumble on Sept. 14 vs. Central Connecticut… Provided six tackles including 3.0 TFL on Oct. 5 at Drake... Earned Academic All-PFL Second Team status… Member of PFL Honor Roll.

2018: Had 49 tackles, one interception and one TFL during his freshman season… Had seven tackles including three solos on Oct. 6 at Dayton… Made his first career interception on Oct. 13 vs. Butler and returned it 25 yards with 5:26 left in the fourth quarter, providing the final dagger as Valpo won the Hoosier Helmet rivalry game 35-17… Set a season-high with 10 tackles on Oct. 20 at Morehead State, then matched that total on both Nov. 10 vs. Jacksonville and Nov. 17 at Stetson… Member of the PFL Academic Honor Roll.

Prep: Was named Team MVP as a senior in addition to becoming an all-state all-star… Team captain for the Vikings while making three interceptions, recording 50 tackles, forcing three fumbles and racking up 12 pass breakups as a senior… Member of National Honor Society and earned academic all-state honors.

Personal: Enjoys playing intramural basketball, Call of Duty Zombies, board games and outdoor activities… Favorite movie is The Godfather Part 2… Son of Mark and Linda Scarsella… Has one sister, Emily, and one brother, Matthew… Born on Sept. 13, 1999… Majoring in engineering.