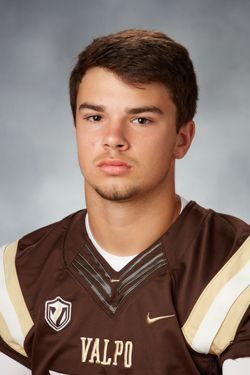 Prep: Was a three-time Racine All-County honoree… Earned All-Metro Classic Conference honors three times… Was a team MVP, team captain and four-year starter and letter winner… Helped his school to its first state championship appearance as the state runner-up in 2018… Named the Racine Defensive Player of the Week… Led the team in total tackles (176), tackles per game (13.5), interceptions (four), TFLs (15), forced fumbles (four) and defensive touchdowns (two)… Finished third in the state of Wisconsin with 176 tackles while setting his school’s single-season record… Had 875 total yards and 12 touchdowns at the quarterback position… Also played four years of basketball and earned an All-Metro Classic Conference selection, was the sole team captain and garnered the Christian Sportsmanship Award while earning three varsity letters… Hit leadoff for his school’s baseball team and finished second on the team in batting average… Was named the Racine Lutheran Male Athlete of the Year, received the WIAA Scholar-Athlete Award and earned a Character Award for volunteering 40+ hours (HALO, Greater Racine in Bloom, Habitat for Humanity & other Racine Lutheran fixtures)… Was the National Honor Society treasurer, the Vice President of Student Council, a member of Student Ambassadors and a member of Crusader Future Leaders… Earned High Honor Roll every semester of high school… Finished in the Top 10 in his graduating class… Was Academic First Team All-Conference every year… Was voted Homecoming King… Broke his elbow during the first contact practice of his sophomore season, but used the challenge as a positive life lesson.

Personal: Majoring in finance… Birthday is Jan. 31… Son of Jeff and Niki Kraus… Has five siblings – brothers Nolan (16), Cohen (10) and Hollace (8) and sisters Haiden (15) and Nylah (12)... Is the oldest of six children in his family… Enjoys fishing and spending time with his siblings and parents… Likes playing almost any sport… Father owns his own company (Krausko) and he has worked and helped out since the beginning of the company, providing him the opportunity to experience the business world from a young age… Traveled to Costa Rica for nine days during the summer prior to his freshman season… Is very fond of animals.