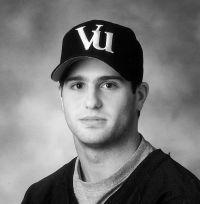 "A model student-athlete, Robert Hadrick could be described as the ultimate "complete player." A four-year starter in centerfield, Hadrick earned First Team All Mid-Continent Conference honors as a junior and senior in 1996 and 1997. As a sophomore, he was accorded Second Team All Mid-Con recognition.

Hadrick demonstrated great speed as evidenced by his 56 stolen bases in 67 attempts. He combined his athleticism with effective power as he belted 19 homers in his career.

Hadrick was just as impressive in the classroom and was selected GTE Academic All-District three times (1995, 1996, 1997). A 1997 graduate of Valpo with a bachelor of science degree in computer engineering, Hadrick is a software engineer for IBM.