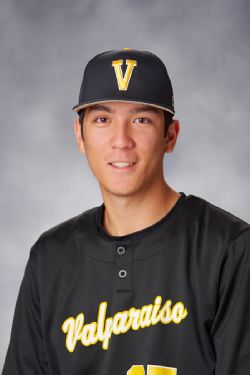 2016: Received 12 starts for the Crusaders during his junior season...won three games and carved out a 4.96 earned-run average while recording a strikeout-to-walk ratio of 46:19...earned the win in Valpo's 14-4 victory over Jacksonville State (Feb. 21) during the opening weekend of play after turning in six innings of four-run ball that included six strikeouts and zero walks...did not factor into the decision at Louisiana Tech (March 6) after spotting the Bulldogs two runs over seven stellar frames...collected his second victory of the season in Highland Heights after yielding only one run in six innings versus Northern Kentucky (March 20) to cap off a three-game sweep of the Norse...kept Wright State (March 26) to just one earned run in five innings at Emory G. Bauer Field while striking out five Raiders and not issuing a free pass...received a no-decision after yielding an earned run over four innings at Oakland (April 17)...was rewarded with his third win of the spring in Chicago after spotting UIC (April 22) an unearned run on three hits in 6.2 outstanding frames...surrendered three runs in 6.2 innings the following week versus the Flames, but took a tough-luck loss...fired 5.2 innings against Northern Kentucky (May 8), limiting the Norse to two earned runs.

2015: Made 13 starts in the weekend rotation in his sophomore campaign...recorded a 4.70 earned-run average to go with a 5-4 record...allowed two earned runs over 6 1/3 innings in his season debut at San Diego State (Feb. 15)...did not factor into the decision at Gardner-Webb on March 1 after surrendering four earned runs in three innings in Boiling Springs, N.C....earned his first win of the season on March 15 after shutting out UIC over seven sterling innings at Curtis Granderson Stadium...one-upped that performance in his next outing - a nine-inning shutout of Youngstown State (March 22) at Emory G. Bauer Field, a start in which he struck out four Penguins while yielding just four hits...lasted just 2 1/3 innings in his next start at Milwaukee on April 2, a game in which Valpo eventually came back to win 11-10 in 12 innings...tossed six innings of five-run ball versus Oakland on Apr. 11, walking just one Golden Grizzly and striking out a pair...was rewarded with the win against UIC (April 18) following seven strong innings where the right-hander spotted the Flames two earned runs in seven innings, striking out four and issuing two free passes...moved to 4-1 on the spring in his next start at Oakland (April 25), when he allowed a lone run over seven frames...walked four Panthers and allowed four runs in against Milwaukee (May 2) at home...turned in eight outstanding innings of three-run ball versus Youngstown State (May 9) to earn his fifth win of the season...took a tough-luck loss at Wright State (May 15) after lasting seven innings, surrendering three runs on seven hits in a 4-1 loss to the Raiders at Nischwitz Stadium...tallied five innings in his final start of the season versus UIC in the Horizon League Championship (May 21) as part of an 8-5 defeat.

Personal: Mario is the son of Mark Losi and Frances Yang...has a brother (Anthony) and a sister (Sarah)...favorite musical group is The Beatles...major is civil engineering...born on June 6, 1995...when he's not playing baseball, he enjoys fishing.