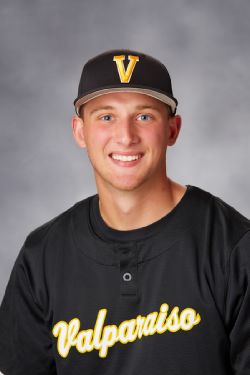 2015: Made 14 starts in his first season with the Crusaders...crafted a 3.82 regular-season ERA while winning three games...didn't allow a home run through his first 69 innings pitched, and did not surrender a triple all season...struck out 61 batters (second on the staff) in 77 1/3 total innings pitched (second-most on the staff)...earned his first win of the spring at USC Upstate after limiting the Spartans to two earned runs in 5 1/3 innings of work...took a tough-luck loss in his next outing at UIC, where he yielded just two earned runs on four hits over seven frames...recorded four starts of seven innings and three earned runs or fewer in his last five regular season starts...was named Horizon League Pitcher of the Week on May 11th after shutting out the Youngstown State Penguins for seven innings, a start in which he punched out a season-high nine batters...held Wright State to two earned runs in seven innings at Nischwitz Stadium on April 16th.

Des Moines Area C.C.: Went 14-5 in the starting rotation in his two seasons with the Bears...held opposing batters to a .253 average and racked up 73 strikeouts in 74 innings in 2014...was teammates with Shea Molitor...was a member of Phi Theta Kappa.

Personal: Ryan is the son of John and Kris Fritze...has a twin sister, Karli, another sister, Teri, and a brother Derek...majoring in sports management...favorite movies are Wolf of Wall Street and Brokeback Mountain...favorite baseball team is the Minnesota Twins...favorite place to eat is Chipotle...favorite baseball player is Nolan Ryan...when he's not playing baseball he enjoys the lake life.