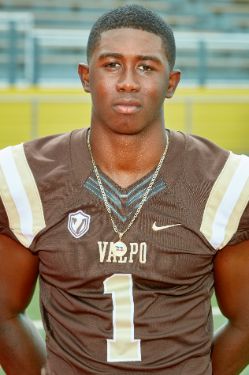 2017: Played in 10 games during his junior season, ranking third on the team in receptions with 26 while compiling 345 receiving yards, averaging 13.3 yards per catch, scoring two touchdowns and averaging 34.5 receiving yards per game… Made a season-high six catches on two occasions, Sept. 9 vs. Duquesne and Oct. 7 at Campbell… Was the only Crusader to have six receptions in two different games in 2017... Had 88 receiving yards on Sept. 9 against the Dukes, his season best… Had his first career rushing touchdown in the Oct. 28 win over Morehead State, plowing over a defender to reach the end zone on a 34-yard rush. Had a season-high 103 all-purpose yards against the Eagles, a game that also featured his longest catch of the year, a 54 yarder that went for his first receiving TD of the season in the second quarter, building the lead to 35-6 in an eventual 63-32 win… Made his second touchdown catch of the season on Nov. 11 at Butler, grabbing a 30 yarder with 5:23 left in the second quarter to made it 24-10 Valpo. The Crusaders went on to win the rivalry game 36-28.

2016: Led the team in yards/catch at 14.6 during his sophomore season... Hauled in a team-high five receiving touchdowns... Played in 11 games and ranked second on the team in receptions (31), receiving yards per game (41.2) and total receiving yards (453)... Finished with 633 all-purpose yards, third on the team... Also had nine kick returns for 155 yards... Caught a 36-yard TD from Jimmy Seewald for Valpo's first offensive TD of the season on Sept. 10 at Sacred Heart...Caught a 61-yard pass from Seewald on Sept. 17 against Trinity International, the longest Valpo reception since Sept. 27, 2014, when Tanner Kuramata hauled in a 69-yard pass from Ben Lehman... The Sept. 17 game against Trinity International also marked Rene's season highs in receiving yards (90) and TD grabs (2)... His season high for receptions (5) came on Nov. 5 at Dayton, when he also set a career high with 137 all-purpose yards... Already owns 10 career TD catches in just two seasons.

2015: Ranked as Valpo's top receiving threat in his rookie year with the Crusaders ... hauled in 34 passes for 456 yards and five touchdowns ... led Valpo in receiving yards and average yards/catch (13.4) and ranked second in receptions ... also carried the ball six times for 38 yards and returned 10 kickoffs for 161 yards ... totaled 655 all-purpose yards on the year, second-most on the team ... debuted Sept. 3 at Eastern Kentucky with three catches for 25 yards and one carry for eight yards ... hauled in two passes for 72 yards, including a season-long 43-yard catch, Sept. 26 versus San Diego ... caught first career touchdown, a 26-yard reception, in Oct. 3 win at Davidson ... found the end zone twice against Dayton on Oct. 17 with touchdown catches of 32 and 20 yards ... scored the next week against Stetson as well with a 17-yard touchdown catch ... set season highs with nine receptions for 116 yards Nov. 14 versus Morehead State, including a 41-yard touchdown reception.

Prep: A three-year letter winner for the Wolverines...received Second Team All-State honors, First Team All-County accolades and was named defensive MVP of his district championship team...graduated with 992 receiving yards, 14 receiving TDs and seven interceptions on the defensive side of the ball...also lettered twice in basketball and once in track and field.

Personal: Jean is the son of Merline St. Louis ... major is business management.