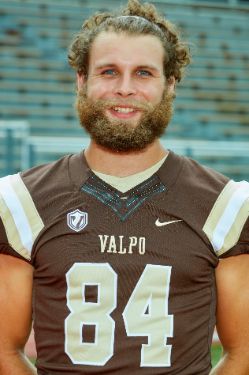 2017: Played in all 11 games and made 17 catches for 226 yards and one TD… Averaged 13.3 yards per catch and 20.5 yards per game… Had a season-high four catches and a career-high 66 receiving yards including a career-long 34-yard grab on Nov. 4 at Jacksonville… Had his lone TD catch of the season and the fourth of his career on Sept. 9 vs. Duquesne, a 13 yarder that accounted for Valpo’s first point of a 45-40 loss to the Dukes.

2016: Played in all 11 games and had 22 receptions for 230 yards including two touchdowns as a sophmore... Set career highs in receptions (5) and receiving yards (57) on Sept. 17 against Trinity International... Had his first TD catch of the season in the game against Trinity International, then hauled in his second TD of the year and third of his career on Oct. 29 vs. Butler... Member of PFL Academic Honor Roll.

2015: Saw action in all 10 games in his freshman year as a Crusader ... hauled in 11 passes for 101 yards and a touchdown from his tight end position ... caught first career pass for 12 yards Sept. 12 versus Sacred Heart ... registered season-long 20-yard reception in win at Davidson Oct. 3 ... caught two passes for 22 yards at Butler Nov. 7 ... set season bests with four receptions for 29 yards Nov. 14 against Morehead State, including a four-yard touchdown catch ... also recorded a tackle against Morehead State ... member of the PFL Academic Honor Roll.

Prep: A two-year letter winner for the Blue Streaks...served as team captain and earned MVP honors his senior year...also named All-Conference, Second Team All-Area Defense and Academic All-State Class 5A in his final season...also lettered in basketball and tennis three times...is the all-time rebounding leader at Woodstock and boasts the highest rebounds per game of any Blue Streak ever...was MVP of both basketball and tennis teams...elected Most Outstanding Male Athlete of the Year in 2015...member of National Honor Society, Spanish Honor Society...ACT +30 Club...and Illinois State Scholar...received the Illinois Principal's Association Award...graduated cum laude and in the Top 10 of his class.

Personal: Mason is the son of Andrew and Kerri Sutter ... majoring in biology.