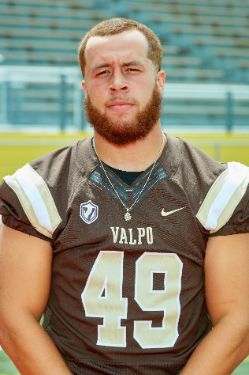 2017: One of three Crusaders named to the all-PFL second team… One of two Valpo players and four players in the entire PFL to exceed 100 tackles… Finished with 101 tackles, 39 solos, averaging 9.2 tackles per game… Set a new career high with 13 tackles in a Sept. 30 home win over Stetson, then matched that with 13 tackles as Valpo won the Hoosier Helmet on Nov. 11 at Butler… Reached double figures in tackles on five occasions including the last three games of the season… Had a team-high 8.0 tackles for loss totaling 12 yards… Had one forced fumble, one fumble recovery, 0.5 sacks, one pass breakup and one QB hurry... Started all 11 games for the Crusaders.

2015: Appeared in nine games in his first season as a Crusader ... totaled 13 tackles on the season ... debuted at Eastern Kentucky Sept. 3, picking up a pair of tackles ... recorded season-best four tackles in win at Davidson Oct. 3 ... also registered two tackles apiece Sept. 12 versus Sacred Heart, Oct. 10 at Drake and Oct. 17 against Dayton.

Personal: Nick is the son of Coryn Turner... majoring in business management.