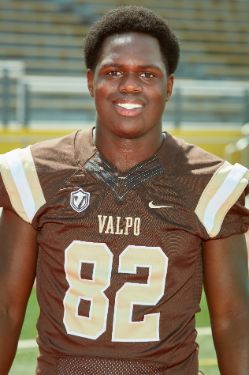 Fall 2021: Played in 10 games and had two receptions for 16 yards while returning one punt for 21 yards, notching five tackles and blocking three kicks... Finished as one of six players in the FCS nation with three blocked kicks or more... Tied for fifth in single-season program history with three blocked kicks and had the most blocked kicks of any Valpo player since 2014... Blocked punts on Sept. 18 vs. Dartmouth, Oct. 2 vs. Marist and Oct. 30 at San Diego... Helped Valpo tie a PFL record for blocked kicks in a single game with three on Oct. 30 at San Diego... Helped the Beacons hold the outright national lead in all of Division-I (FCS and FBS) with nine blocked kicks.... Had a reception for two yards on Sept. 4 at Indiana Wesleyan and one for 14 yards on Oct. 23 vs. Dayton... Returned a punt for 21 yards on Oct. 2 vs. Marist.

Spring 2021: Appeared in four games, starting each of the season’s first four contests… Had a kickoff return for three yards on March 13 at Butler… Made a tackle on March 20 vs. Drake… Named the team’s Special Teams Player of the Week for Week 3 vs. Butler… Member of PFL Academic Honor Roll.