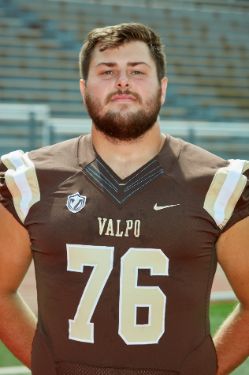 2017: Played in all 11 games for the Crusaders… Started Sept. 2 vs. Montonaa, Sept. 9 vs. Duquesne and Sept. 16 at Trinity International… Member of an offensive line that helped Valpo finish tied for 10th nationally in fewest sacks allowed per game at 0.91.

2016: Played in three games during his redshirt freshman season... Made his debut on Sept. 10 at Sacred Heart before also seeing action on Sept. 17 vs. Trinity International and Nov. 12 vs. Jacksonville.

Prep: A one-year letter winner for the Fighting Irish...played on the team that set the record for most consecutive playoff wins in Indiana High School history (30)...also played rugby...was a part of the 2014 National Rugby Championship team...made Honor Roll from 2011-13 and earned High Honors his senior year.

Personal: Alex is the son of Chris and Andrea Cotton ... major is business management.